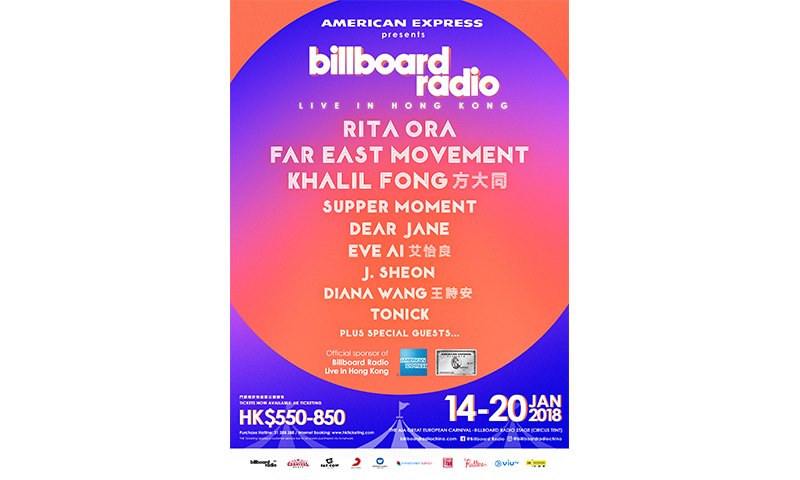 Save for the dates! From 14th-20th January 2018, more than 10 pop artists from UK, USA, Taiwan and Hong Kong will line up and perform at American Express, The Official Sponsor f Billboard Radio Live in Hong Kong 2018, presented by Billboard Radio China.

It will be also the first live performance of pop diva Rita Ora and first major performance of LA-based Hip Hop/EDM Legends Far East Movement in Hong Kong. If you’re more into Mandarin pop, don’t miss out Khalil Fong and Eve Ai who won 28th Taiwan Golden Melody Awards 2017 - Best Male/ Female Vocalist Mandarin. On the other hand, influential rock bands in Hong Kong Supper Moment and Dear Jane will be there too.

This year, the live show is again supported by The AIA Great European Carnival which takes place in Central Harbourfront. Any ticket holder of Billboard Radio Live will also have free entrance of the carnival the same day. The circus themed stage is not only about whimsical outlook but also brings you the intimate gig experience with your beloved artists. The live show will be held on the circus themed stage at the carnival too and I cannot wait to see how it looks like. See you there!


In case you’re not familiar with Billboard Radio China, it’s the first Billboard-Branded digital radio station in Asia which includes 6 digital platforms such as Billboard Hot 100, China Hits, Asia Hits, Rock and EDM/ Club channels. Find out more on their website or download the app here to see the charts and access to the streaming channels.