There's about 40 or so people chilling outside Grappa's this Thursday night (eve of Good Friday) for the John OO Fleming gig. Suv is also playing tonight, so there could be divided loyalties (right Manek!). It's nearly midnight. The place is filling up. Ewan is banging out some hard rocking sounds, like it's already 4 am - there's a nervy, wired sort of feeling to the sonic assault, possible subliminals, lots of drums, space bass etc. He ends about 0015 am.

Jason F is on next, working the room into a frenzy for JOOF, due on about 0130 am. Jason has opened for Paul Van Dyk at HITEC and Lisa Lashes at Grappa's last October, among others. Clearly an up and comer. He handles a midset sound failure without getting too upset. and finishes with some deft scratching as JOOF gets ready.

I don't know too much about John's style. I figured he's sort of Sasha-Digweed spacy daze - perhaps some of PVD Politics of Dancing Vol 1. He starts with some Giorgio Moroder inspired electro mixed with Chemical Brothers style breakdowns and mutates into some Eddie Halliwell hard noise (the mid-section of EH's HITEC debut last Xmas Eve. He also sounds like Israeli progtrancer Moshic channeling airport tannoy messages. Overall, JOOF sounds harded than I thought, more like PVD's new direction, but I promise, I didn't yawn once during his 2 and a half hour workout.

DJ Tynee, a young lady and possible friend/protege of Jason F? takes over from John at 0400 and plays the midnight set. Tunes with vocals, some wierdgood breaks and a happyface, keeps the slowly dwindling crowd satisfied and sorta dancing. My approximate headcount is about 600 or so people, but it was dark and i may have counted some twice. Good to catch up with regular fellow clubbers, Karina, DY and PK (tho' you all left rather early). Grappa's is looking like a good choice for a late nite venue. It's hosted Lisa Lashes HK debut, the return of the Plump DJ's, JOOF, and breakbeat duo, Hybrid, the next night. Drinks are strong and my ferry pier is a short stagger and hop away. Top night and many thanx to Nick Willsher and Manek for all their help. See you at the next gig.

Terry Jones, founder, creative director and editor-in-chief of i-D magazine, arrived in Hong Kong from London to officially kick off i-DENTITY, an exhibition celebrating the magazine’s past 25 years this April. The exhibition is the Hong Kong cultural centre showed covers and impressive articles covering the magazines history on a variety of walls with celebrities and fashion industry guests joining the party.

Supported by Diesel the event was a success with djs, music, drinks and networking over a weekend evening.

When I arrived Jason F was spinning already (about 1am) and the venue was already rammed up, but you could still move around and it was not to hot as the aircon was working well.

The layout had the stage in the middle and jason played some excellent remixes of well known tunes in electro and breaks versions which got the crowd very warmed up and with their arms in the air. About 2.30 ish the Hybrid duo on tour came on and played back to back having time to chat to us and sign some posters for our site giveaway.

Great show, sound and turn out. was tired after so many public holiday parties but Hybrid and Jason did quickly wake me up.

Arrived quite early at Tribeca as I knew the que would be quite long, two rooms one hip hip and the other more breaks and a bit of Electro. jason F just came on and mixed both music styles in the main room together.

It was full but comfortable and the hip hop room at the front seemed to be solid, making quite a seperate venue of people interested in two different kinds of music in their own areas.

james came on when there were still quite a lot of people waiting down stairs but from what I heard those people where able to get in and enjoy James great tune selection. Would have liked toe booth to be overlooking the whole club, I am sure James would have liked that too, but that is how the clubs new design was that night.

Great vibe and crowd with a busy bar, hopefully more bigger venues can be found for such a music combination event.

To have a 20 year old DJ fly in from overseas to entertain a crowd which is demographically on the senior edge is already quite a hard stunt to pull.  But then to see the same 20 year old DJ make the crowd lose control in the club, that is phenomenal.  From 1.30 am onwards, DJ NYK, Indiaâs youngest # 1 DJ, was rocking the exclusive Champagne Room at Sugar to celebrate Year of the Dog on Chinese New Year.

After taking a short tour of Lan Kwai Fong and the adjacent SOHO area, NYK walked into Sugar to a packed house of anticipation and a lot of whisky being poured on ice.  With support from the infamous 3 Phat DJs, host and organiser MC-G stepped up to the stage to welcome to the young superstar to Hong Kong.  He sure made his presence with a dramatic audio intro that bewildered most of the crowd with excitement, for them to then hear the faint vocals of âJHALAKâ (from the movie Aksar) humming over deep house grooves through the massive sound-system.

DJ NYK kept it pumping for hours, and even party-whores like myself couldnât last!  We hope to welcome back DJ NYK and hopefully have more DJs like him touch down in HK.  Special credit and thanks goes to the sponsor Sunny Lakhwani, support DJs, promoters and organisers â the 3 Phat DJs, MC-G and Asian Flava.

Donât forget to check out the all the cheesy smiles in the Photo Section.

Heading back into the marquee, the sounds switched from a heavy-thrashed up set to something much more to my taste, nothing but funk!  The Uptown Rockers had the crowd in a booty-shaking mood, and thatâs what the funk is all about.

They delivered a respectable set, mixing up some raw and jazzy beats with all sorts of classic and new funk elements.  Without a doubt, their performance was a good touch for a Hong Kong music festival.

Founded on a collective impulse of friends and colleagues to create a vibrant music festival Pop Montreal has grown over the course of three years of hard labor to include a broad cross-section of art forms and music.  This year has seen some of the most captivating, fresh and innovative music in the underground cultures of North America, showcasing an umpteen number of smaller artists on the verge of becoming something huge.  Pop Montreal aimed to bring together independent musical talents from Montreal and abroad in âa festival that celebrates the intangible and transcendent value of music and artâ.

Attending three of the fifty some events I was able to only get a small glimpse of the big picture, but from what I did see I can guarantee that the organizers were true to their word and âthrew the greatest party in the worldâ.  Although a number of the headlining acts backed out of their performances, such as Architecture in Helsinki, Poni Hoax, and Foxy Brown, the organizers quickly pulled up their socks to find quality replacements.  Of the shows I did attend the Kiss Me Deadly performance at Casa Del Popolo (co-hosted by Alien8 Recordings) was on the top. Not only was the music as a whole great, but it was the first time in a long time that I had seen a band formed from such talented musicians as individuals. It was obvious that each member made a direct contribution to the charismatic musical masterpiece that was showcased.
Way to go Pop Montreal for hosting such a successful festival and for bringing such awesome music to the people of Montreal!

www.popmontreal.com
Photos from Pop Montreal can be found at www.mileendmecca.com

Hitting the streets of Montreal next week (Oct. 19th â 22nd) is the mega popular and trendy festival MEG Montreal.   Showcasing talent from three continents this ultra hip electronic groove fiesta promises to be one of Montrealâs finest festivals of the year.  This undeniably great musical event, which was initially set up as a musical link between Montreal and Paris, and founded by Jacques Primeau and Mustspha Terki, is celebrating its 7th year anniversary; following its auspicious debut in 1999.  Over the years this festival has grown into an internationally recognized event amongst the artistic community for its exceptional quality.  With a firm foundation in showcasing a musically diverse international line-up in the past; from M83, Miss Kittin and Nouvelle Vague, and displaying such a resounding success into music expression locally in Montreal, MEG has been invited to host events in various cities scattered around the four corners of the world, most recently in Mexico, Italy, and at Printemps de Bourges in France.
Read More 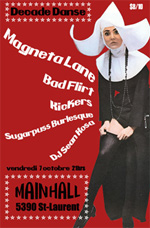 Magneta Lane: Young, talented, and energetic.  These girls really know how to put on a great show, I almost can't believe we still have the luxury of catching their hits in these smaller intimate venues like Main Hall.

The Decade Dance party at the Main Hall is a monthly event, hosted with the intention of bringing smaller indie bands (with females in the leading roll) into the spotlight.   Already starting to attract quite a following there were over a hundred people in the Main Hall for this Friday night event, and who could go wrong with four awesome bands heading up the show.  An added bonus: girls get a free drink drink at the bar!

Look for franco-electro rockers Echo Kitty to blast the roof of the venue next month.

Downtown Montreal Quebec on a rainy Friday night:  Aria, an after-hours nightclub was hosting the crowning event to a night on the town, Roni Size.  Previous witnesses to a live drum and bass performance by Roni Size have suggested to me that the experience will be nothing short of spiritual.  But now, after seeing this legendary DJ spin live I am left with a void and a feeling of mis-understanding.
Each track spun, on its own, had a quality typical of the excellence traditionally seen from Roni Size, however it seemed as though he was incapable of mixing one track into the next.  I see drum and bass as being a high-end art form in which one elaborate and fluid motion is created, and being that d&b dancing tends to require whole-body flexible movement it becomes extremely difficult to maintain flow if the music stops every three minutes!

Overall I was incredibly impressed with the venue as it possesses a sound system superior to those in most clubs, but I wouldnât have recommended paying the $15 to see Roni Size live.