Killer Soap represented China in the Global Battle of the Bands! 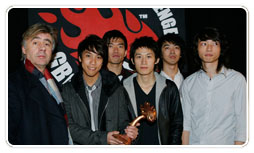 The climax of the 2008 Global Battle Of The Band competition - the world final, was successfully concluded in London over 2 days in December, featuring the national winners from 26 countries performing to an enthusiastic live audience at the Scala (located in King's Cross and one of England's premier venues)

The format of the final was the same as the national rounds - 2 songs within an 8 minute set, with each band vying to impress the impressive panel of judges comprising of  Glen Matlock (Sex Pistols bassist/songwriter), Jim Lowe (producer: Stereophonics, Charlatans etc) and Ben Adams (ex-member of A1 and now producer).  Also in the audience were record company scouts.

Although Killer Soap did not make the top 5, they were singled out for a special mention at the awards ceremony and won considerable praise and encouragement from the judges who all agreed that China would be the country to watch at next years finals. "Clearly Killer Soap have put the world on notice that Chinese bands are ready to take the world stage in rock music" said Matt Walker organiser of the Global Battle of the bands competition. "The bands enthusiasm, sound and great vocals really got the judges attention" he said.

Plans for GBOB 2009 include adding Beijing, Guangzhou and Macau as cities with preliminary heats with a China Final to be held in Hong Kong this year as a Hong Kong band won the China GBOB in 2008.   Six China cities.

Here are some quotes from Killer Soap members:

Killer Soap have been together for a few years, participating in the GBOB World Final opens up a whole new chapter for us, both musically and culturally. It was really really exciting to share music with bands from other parts of the world . Despite of the difference in our languages, skin colors, cultural backgrounds and musical styles, we came together, in London, to share and appreciate music. Music became the universal language for us to communicate with each other.
The way the audience treated the performers on stage was also very different from what we see in Hong Kong. We can tell from their faces and body movements (dancing) that they really come here to enjoy music.

Although we did not win the USD$100,000 prize, but this trip to UK for the GBOB has broadened our musical horizons, helping us to review our own music as well as stage performance which are much more valuable than the money prize. We have also witnessed the great difference between the music scene in Hong Kong and UK and realized that they are a lot of work that we, as well as other local bands, should do so as to improve the music scene here.  We hope that the GBOB will keep on expanding, including more and more countries in the future.

ManMan, guitarist of Killer Soap:
I must tell everyone that almost all of the GBOB staffs were very very kind and
helpful, they prepared and ran the function well, booked hotels for bands, clear directions on everything in the competition...
They really made us feel so good! Thanks to all GBOB UK 2008's staffs!

From the battle we made many friends in different countries, and learnt how does their music look like. They are really different from what we hear here in Hong Kong, and all the bands and their songs are great!!! "Floors and walls" from UK were crowned the champion and I am really happy about it, I love their music!!! Cheers Floors and walls!
Sound setting and amplifiers tuning are also very different between UK and HK, thus some of us can't get the right setting as we did in HK... Yet this is also a valuable experience.
Finally, to me, GBOB UK was the greatest and biggest competition i have ever participated in before, it is not only a competition, it also enlarged my views on music, pushing me to think more about songs than ever before. I am too lucky to be one of the "soaps", and I am too lucky to have such a good time in the GBOB UK trip!!! ^^