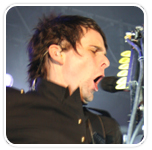 Muse first attracted my attention on the Live-8 broadcast, 2005. I thought they'll be worth seeing if they ever come to Hong Kong. So here we are, further along the eternal present and they've come to Hong Kong from Taipei where thy played the Spring Festival. This is my first trip to the AsiaWorld-Expo Hall, which has already hosted Oasis, Coldplay, The Black Eyed Peas (2006) and Eric Clapton (2007). Not all of those shows were stunning successes, according to friends of mine who attended. Most of the complaints were about the shoddy sound. Extra demerits for Oasis for being arrogant cock rockers living high off their 90's rep.

The Black Eyed Peas seemed to garner the most praise. It's easy t walk into the Expo, off the Airport Express ($100 single day return). A can of Carlsberg is $32, while a plastic pint of (allegedly diluted) froth is $50. Lots of people streaming in though. I spot my nephew, Christopher and his mate Ed. Also quite a few Lamma Island neighbours like Katie and Alex, Vicky and Adam. I'm with a riend, David, who intends to film as much of the show as possible.

Inside a huge hall is partial pandemonium. A large line snakes around the floor. People trying to get beer? Nope, just entry to Zone A, the $680 enclosure. Zone B, the $380 tickets is much easier to get through. Seems like an overkill on fussy security. It takes some people nearly an hour to get inside. I spotted some willing to trade down their tickets - straight swap - just to get in earlier. David is one of these, but after assuring the security he won't go forward, they let him enter.

The pre-gig soundtrack plays "Blue Monday", "It's My Life" by Talk Talk  and the opening sentence of Waiting For My Man" by Lou Reed as the lights dim, A huge roar of expectation and Muse are on stage. They've just won Best British Band of 2007 at the NME Awards, so the crowd is really up for them. David is standing near the mixing desk, filming happily away. I think I see the DJ from The Edge behind the controls. Just observing out of professional courtesy methinks. I trust Muse have their own soundman with them.
The band is Matt Bellamy on vocals, guitar, keyboards and piano. Chris Wolstenhome on backing vox, bass and keyboards. Dominic Howard on drums. They also have Morgan Nicholls assisting on extra keyboards and samples.

I'm not familiar with all their work and know few of the songs. The Post says the opening tune is "Take A Bow" which segues neatly into the next two songs before Matt says "Good evening Hong Kong. How are you" to the rapturous crowd  Over the course of the concert, the songs seem to fall into three styles. There's the falsetto warblings and tinkly piano which recall vintage Freddie Mercury. There are the extended prog rock gallops which remind me of The Nice/ELP or Beggars Opera in full flight. And there"s the gnarly, grinding guitar solos which are like the slo-mo sonic assaults of The Groundhogs or The Scorpions. Plus whispers of electronica floating through the mix I'm trying to suggest patterns or styles of these songs, not a series of note-perfect homages. Above all, there;s a chilly alienation in these tunes. This is not happy emotional music, but something more cold and dislocated. In a way, it's an updating of "Jilted Generation" by The Prodigy. Or "Snivelisation" by Leftfield. It appeals more to "the kids" up front who spend a lot of waking time jacked into the net or on an I-pod or Blackberry. After all, you're on your own when you don the 'phones. It's your own private universe, even within a crowded house.

The light show is either flashing searchlights, mounted across the top of the stage or vertical bars of colour in chilly bluegreens or reddishpinks. The big screens on each side  are fine in the close up details. Dom on the tunder drums is especially rivetting. His hands are a blur of motion and the tempo nover slows until the song is over. Chris, who's sporting a nifty Edge-style 'tache, underpins the melodies with some insistent bass lines, straight out of the Rare Earth song book. Matt, who seems to morph between Steve Coogan and Frank Lampard, isall-prominent. Morgan appears intermittently as if to remind you that tonight Muse are a quartet.

I've spent most of the show right at the back of the hall and from there, some of the lyrics get lost in translation. Not sure if it's wonky mixing or too many words to hear and take in. The avid fans don't appear to have this problem. They cheer every song to the rafters. The show started at 2050. It ended at 2210. A 20 minute encore, concluding with "Knights of Cydonia". Just a couple of quibbles with the Post review in the Sunday paper. Muse seem to have gone from Best British band to best band in the world overnight. Where's that from? The volume wasn't exactly ear-splitting, even standing by the mixing desk. I'm pretty sure there's a decibel limit at most of these shows these days. People I talked to afterwards were divided. The Young Ones were effusive in their praise. Older concert goers were more shoulder-shrugging and seesawing hands, like they were OK. What's all the fuss about? As for the unknown young fan quoted in Sunday's Post review who said it was "the best gig Hong Kong has had in years" and called for less "aging dinosaurs like Sting". I want to say I agree partly with you. It was a good gig and I'm not sorry I went. But another rock dinosaur, Roger Waters, set the bar at his show on 15/2/07. That is still my contender for Best Show Of The Year. The sound, the lights, the props and fireworks blew everyone's mind. Muse were good, but still fell short. Sorry.