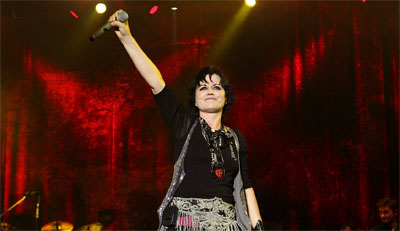 “Everybody Else Is Doing It, So Why Can’t We?” was the title of one of The Cranberries’ albums and following recent shows by 80s and 90s (take your pick) hitmakers Duran Duran and Roxette, it was their turn to roll back the clock at Wan Chai’s Convention and Exhibition Center on April 8th.

So there lead singer Dolores O’Riordan was—front and center onstage—dancing around like a soccer Mom nearly nine years after the Irish group called it quits. The intervening years have been kind to O’Riordan’s voice. Her vocals still possess that lusty growl that punctuates such hits as “Zombie” and the more metallic “Animal Instinct”. She also still has the range that made opener “Linger”, the first song they ever wrote, an early crowd favorite for the 2,000 long term fans in attendance.

More than 20 years after the group formed, what also became apparent during the 22 song set was how lightweight and gimmicky many of their biggest hits now sound. Where O’Riordan’s vocal whoops (several of the songs are punctuated with sharp “Doo doo doo” or “Eh, Eh, Eh” choruses) and crunchy guitar lines stood out in the days of heavy MTV airplay, they now sound nearly fluffy and devoid of any true impact.

With the original quartet now fleshed out to a six piece band onstage (complete with female backing vocalist), a minimalistic starry backdrop and economic stage movements (save O’Riordan), it was up to the songs to save the day. At times they did. Haunting choruses like “Does anyone care?” and the wall of sound during “Put Me Down” showed there’s plenty of life in the group yet.

But the largely muted response to new tracks from the group’s latest album “Roses” and the nostalgic reactions to the sheer barrage of Cranberries as the night went on showed that in terms of reunions, this won’t go down as one of the biggies.
And while she may have looked battleworn backstage, O’Riordan was a far more engaging frontwoman than many who have graced our stage lately. “It’s Easter Sunday, think about your families” was just one of many holiday related quips  she enthusiastically shouted out to the audience.

For longterm Cranberries fans, this may have been all the extra juice needed to call this show a success.