Izakaya Gatherings for Friends at Free-Flowing ‘Sake Saturdays’ at zuma

Izakaya Gatherings for Friends at Free-Flowing ‘Sake Saturdays’ at zuma 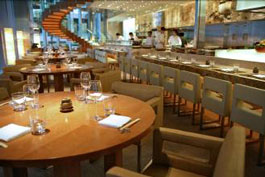 Free-flowing sake and izakaya style food are encouraging gatherings of friends every Saturday afternoon at internationally acclaimed Japanese restaurant and nightspot zuma at The Landmark.

‘Sake Saturdays’ are being launched on February 27 until June, for leisurely afternoons savouring sake from renowned guest breweries.

Priced at HK$490+ per person, ‘Sake Saturdays’ is being staged on alternate weeks, starting at 12 noon, including 18 izakaya style dishes served fresh from the grill and open kitchen to complement featured sakes.  For those who love the izakaya experience, they can also enjoy the afternoons without the sake at HK$450+ per person.

With breweries from all over Japan presenting their award-winning brews, Executive Chef Matt Abergel has created a wide selection of 18 unique dishes being served to complement the regional sake being showcased, including Wakasagi river fish nanbanzuke;  pork shaboo with cabbage and sesame ponzu as well as crispy scallops with roasted turnip.

‘Sake Saturdays’ emphasizes the izakaya-style atmosphere & experience of casual and social venues for after-work drinking, with an accent on seasonality of the items served.

The term ‘izakaya’ originates from sake shops allowing customers to sit at the premises to drink, and are sometimes called akachōchin (red lantern) establishments because lanterns traditionally hang in front of them.

Kicking off ‘Sake Saturdays’ on 27 Feb and 13 March is the famous Nanbu Bijin brewery from Iwate. Dating back to 1902, it was named after the Japanese for ‘beauty in Nanbu’, reflecting its high quality sake with all brewing rice washed by hand.

A winner of countless awards in both Japan and internationally, Nanbu Bijin is being introduced by Kosuke Kuji, a 5th generation member of the sake-making family who is famous from worldwide promotions for his unforgettable smile.

Shichida, a global brand from the Tenzan Brewery in Kyushu, is showcased on March 27 and April 10.

Internationally renowned Born, served at State dinners and events including Cannes Film Festival and the 2002 World Cup Opening Ceremony, is showcased on April 24 and May 8.

Hakkaisan, from one of Japan’s highest mountains, Mt. Hakkai in Niigata, is featured on May 22 and June 5.

(information provided by the PR company)