Ministry Of Sound are to transmit a 230 hour continuous live radio broadcast this Easter, which will include two weekends of club nights from their South London headquarters.
Read More 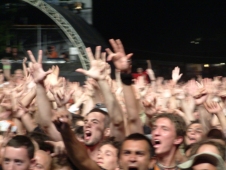 Exitâ€™s International Director Paxton Talbot told Skrufff heâ€™s delighted about the link-up, declaring â€˜we feel very privileged to be working with Radio 1 and are looking forward to having them out as our very special guests.â€?

Ministry Of Sound Radio are to start broadcasting the Skrufff radio show every two weeks, following the successful launch of the show last year.

The show will run for 2 hours every other Monday evening from 18.00GMT, featuring live guests, DJ mixes and music from the alternative electro-disco-rock style Skrufff already champion through their press agency.

After all the madness of NYE and all those endless after parties and with the post Xmas credit card bills hitting your doorstep, like me you might be feeling a little too burned out & Skint to face clubland for a while. For this reason I did a little research into the trance radio this month so you can rave safely in the comfort of your own arm chair.  Just get a friend to flick the light switch on and off , get in a few bevvyâs and lets Av it couch potato style!!!
Read More

âThe South American Music Conference will unite international prestigious producers, artists, musicians and other professionals. It is a unique opportunity to be part of one of the most important events in the worldwide electronic scene in a city that truly never sleeps.â

Where has all the vinyl gone! Ableton Live Software DJ Mixing

At the risk of sounding a bit tecky this month Iâve just gotta shout about the new thing going on the world of Djing.   Its the introduction of software mixing.  If youâve recently been to see Djâs like Sasha, Gabriel & Dresden and Jon 00 Flemming you might have wandered where all the vinyl went and why there not even playing CDâs anymore.  The answer is mixing just went virtual and now it can all be done on your lap top.

With just 1 day to go until Europeâs biggest and boldest awards show, MTV Networks Europe has announced the final line-up of performers and presenters for The MTV Europe Music Awards 2004, to be held at the at the Tor di Valle, Rome on November 18th 2004.

MTV will also stage MTV At The Coliseum - a free public show to be held simultaneously with the MTV Europe Music Awards. The show by Romeâs ancient amphitheatre will feature live performances and live appearances from Anastacia, Elisa, Carmen Consoli, The Cure  and Hoobastank, with The Cureâs and Hoobastankâs performances also featuring in the live MTV Countdown Show which will be broadcast across MTV Europeâs network of 11 regionalised channels from 2000CET. Anastaciaâs live performance will be beamed live from the Coliseum to the main Awards show.

The MTV Europe Music Awards, which will air to a potential worldwide audience of more than 1 billion people, is sponsored by Replay Blue Jeans, LâOreal Paris Studio Line, Hewlett Packard and Foot Locker.

Jonty Skrufff, the owner of Skrufff, UK's famous source of Electronic music news and information and who is also a contibutor to HKClubbing has now launched himself on MinistryofSound.com spread his electro vibe to the world!

DJ Alixir who runs HKClubbing.com's UK operations will be off to Germany on the 9th October headlining a Night with Agent Orange. If you are in Germany and love techno then you should go and check out the party.