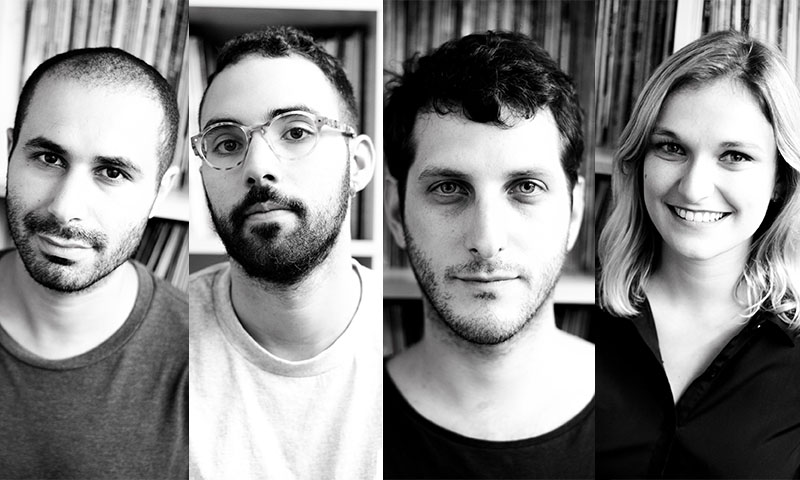 We caught up with Cliché, the Label & Booking Agency based in Hong Kong that is planning its 5th Anniversary with Borrowed Identity & ATEQ at Studio on the 22nd April.

Ouissam, what brought you to Hong Kong and made you setup Cliché artist bookings and record label five years ago?
I used to live in Guangzhou for three years and I had a job opportunity in Hong Kong that brought me here. After a year, I started meeting people in the city who were passionated a about underground electronic music but at that time there were not a lot of options around for this kind of parties. I became DJ resident at The Mira Hotel, and with this first step into the music industry in Hong Kong, I decided to launch the first Cliche parties at The Mira and the first XXX, we had a quite an unexpected big response!

Following that, we get to meet different artists in Hong Kong and we naturally created the booking agency to start working together!

When we started the label we wanted the Artists to reflect who were at a certain of period of time, a bit like a snapshot of our musical view and inspiration of the moment.

Our first release has been produced by a Paris based techno producer called “Renart” (which is a way to write “Fox” in medieval French) who have a very interesting and original way of producing techno. He’s not doing Detroit Techno (fast, warm, raw) or Berlin Techno (slower, cold, very precise) but very much something on his own.

The 2nd producer is named Fulbert and is a Seoul based french producer. We commissioned this artists a “House” music EP because that was exactly what we were listening all day long during that period of time.

Fast forward two years, the time we needed to drastically grow up in our vision and approach of electronic music (and also cope with an amazingly long delay to press records vinyl, almost 6 months…) we decided to invite two Glaswegian producer named “General Ludd” who impressed very much by there quality of production of previous EPs and also previous projects (Golden Teachers). It’s an honor to have them on the label, the EP they prepared for us is probably the best one they did so far.

The next artists I would love on the label are actually “us” and people around us. We cannot always count on “established” artists to make the label known throughout the world, we need to show what we and some other friends located in Asia, are capable. we are not 100% ready yet but we are getting there.

Samy and David, let us know some of the artists that you have booked over the last 5 years and what was both of your favourites?

We had so many! To name a few we have invited San Soda, Andy Hart, Fantastic Man, Francis Inferno Orchestra, the guys from Giggling, Jackie House ,Telephones, Borrowed Identity, LPZ..  But the two best set I have heard are the ones from ND Baumecker and Gonno. You can tell they have been Djing for so many years. I think ND was celebrating his 20th years of Djing when he came playing for our cliche 4th years anniversary. I liked the way he was mixing, super tight and crazy selection. Same as Gonno actually. I think they should play back to back together one day!

Julie, getting your fans to enjoy Cliché music and events, how have you found the Hong Kong market compared to other places you may have been and worked?

I think 5 years ago, the scene was very small and thanks to the effort of many promoters and passionate people in Hong Kong and around Asia, it is growing. But the challenge compared to other places has always been to keep a good crowd in a city that moves really fast and where a lot of people are just passing through for one or two years. Also, the house music culture is not as strong as Europe so you have to put extra effort to attract people. At the end, the difference in Hong Kong, the crowd will be following us, as a promoter, and trust us for the selection of the artists we bring bring to Hong Kong, most of the time they don't know them. That is quite interesting in this case, because we make them discover artists. Also, I think compared to other places you get to know people in the industry for all around Asia very easily. Hong Kong is very cosmopolitan place and the links and experiences you create are stronger, which makes the world feel much smaller than it is.

To everyone, what has been the most memorable event in the history of Cliché so far?

Jeff: The 4th anniversary party, three days of madness with what we consider the best DJs in the world.

Samy: I think the boat party we did for our four years anniversary with the guys from Giggling. Happy faces all around, impossible to forget the moment where Dj Dustin dropped Maria by Closer Musik, we were coming back at night to the Harbour, spooning and looking at each other, with the lights and everything magical!

Ouissam: For me, all the journey and every parties, moments were unique.They are so many memorable events! Each events bringing new people to meet,special moments to share!

Julie: For me as well, these 5 years have changed my life in so many ways.I think this family feeling here is very strong, I sometimes still can believe all that happened and I m looking forward to many more memorable moments!

Julie, can you tell us more about your Anniversary party on the 22nd April at Studio?

We all feel that this one is very special to us! We have two artists from Berlin joining us, Borrowed Identity and Ateq. Borrowed identity has been with us for the past three years and produced amazing tracks for our third release on label homesick. We are also really happy to welcome Ateq for the first in Hong Kong for the famous Label Giegling.

This 5 years anniversary is feels a bit nostalgic for us, thinking about all the people we've met on the way and all the crazy adventures we had until now. It is also feels like the beginning of a new chapter for us. We hope to celebrate that with all of our friends and people who wants to join us, we are very grateful.

To everyone, what do you find are the difficulties within the Hong Kong music industry and what do you think can be done to make it better?

Jeff: The problem is quite simple, as long as we need to give 10, 15 or 20k USD a month to a landlord to rent a 100 people venue, Artistic directors would not be able to do a proper job and invite the proper artists, they are pressured to invite not the best but the one who would draw enough people to cover the costs. Greediness is killing Hong Kong in many ways, not only arts.

Samy: With the in and out in the city, I think it’s hard building something in the long term without disappearing after few years if you are not bringing something fresh and coming up with new ideas, people here are always looking for new things. Rent is of course of huge challenge for the ones who are running venues. We can still have the best time and see the best Djs but at the end of the month someone needs to pay the rent and it’s not really pushing scene because of the pressure that it implies.

To everyone, what exciting things do you have planned for the rest of 2017?

Samy: Equation for sure! Beginning of a new chapter in our life. I’m curious, excited and scared at the same time, let’s see how it goes!

Julie & Ouissam: For me as well, Equation is definitely the new chapter now and we are really excited about it. But I'm also looking forward to celebrate the One year anniversary of Savage, our Club in Hanoi coming in September.

Cliché 5 Years Anniversary with Borrowed Identity & ATEQ will be on the 22nd April at STUDIO. CLICK HERE for details.