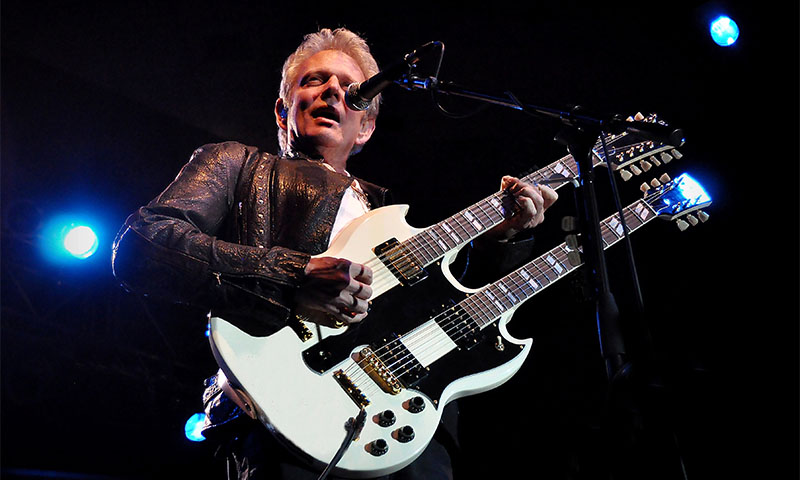 With the song “Hotel California,” ex-Eagles guitarist Don Felder is responsible for one of the most recognizable rock riffs of all time. He’s written quite a few others too—many of which long-time fans of the rock group recognise, and many of which he’ll be performing with his band at the first Hong Kong Rugby Union Ruck ‘n’ Roll Charity Ball on the 5th of November at the Hong Kong Convention and Exhibition Center in Wan Chai.

Ahead of the performance, Felder talked from his California home about life after the Eagles (he was abruptly dismissed from the group without explanation in 2000), his thoughts on the sudden passing of group member Glenn Frey earlier this year and performing in this city for the first time ever.

You’re performing for the first time in Hong Kong to benefit the Po Leung Kuk charity. How do you feel about all this?

I do tons of charity shows every year and it’s one of the delights of my career. As for Hong Kong, I’m very excited. I’ve never been to China at all. Everything I’ve heard about it is fantastic. I’ve played in Japan a lot before—in the 1970s and 90s with The Eagles—and I’ll play there after the Hong Kong shows.

What can the Hong Kong audience expect?

I do about 80 percent Eagles material via songs that I either wrote or toured with and then I do some of my solo material like “Heavy Metal” (a song I did for the 1981 film of the same name). I do a tribute to the late guitarist Stevie Ray Vaughan, doing songs like “Pride and Joy” and we’ll just have fun. It’s an exciting set. By the end, when we’re doing Eagles songs like “The Long Run,” “Life In The Fast Lane” and “Hotel California,” everyone is on their feet and rocking.

How many shows do you play a year?

I do about 75-80 show a year and I’m currently in talks to have a residency in Las Vegas early next year. I find that if you’re on the road all the time, something is going to suffer. Like, I know the guys in Chicago play 150 shows a year and go through personal hardships as a result. I find that I’m happiest being able to balance the two.

Do you feel as creative as ever?

Yes! In fact, I’m writing and recording six new songs which should be finished in October. It’s something I have to do. Part of being a musician is the creative process that gets the inspiration going. I’m doing an EP right now for the radio, for my set and while the year is going on I’ll release another EP. It’s a new model so you don’t record every few years.

I don’t write in just one genre. My last CD had a lullaby and then a rock song and then a pretty love ballad. I get to write in a wide area and a wide style. My next stuff will include a Latin flavored song, some electric rock songs on it and a piano ballad. Something strikes me and I follow that. I’m just writing the stuff that I feel that I need and want to and am excited about. I’m as excited now as I was when I was 15.

How about your book “Heaven and Hell”? Did you write that yourself or did you get help?

I wrote 95% of it myself. It wasn’t intended to be a published book in the first place. It was just me doing daily meditations to see how I had grown up in a destitute impoverished situation in Florida and how I wound up being in the largest band in American history. I wanted to get a good understanding of what had happened so I wouldn’t go forward and repeat the same mistakes. It was a very cathartic process for me.

Pretty soon I had a legal pad full of memories. My girlfriend read them and said they would make a good book. I can’t write— I failed ninth grade English—so she introduced me to a guy and the next thing I know I’m on a plane to New York and five editors came back to work on it.

What was your greatest lesson?

If everyone could sit down once a year and write their experiences from the year instead of waiting 50 years, you could recognize traits and mistakes that you had made. You get a great self understanding. Now I do it once a year so I can understand my life better.

Where were you and how did you feel when you heard that former bandmate Glenn Frey passed away earlier this year?

I was flying back to Los Angeles from Mexico, where I was doing a celebration charity concert with Billy Gibbons, a couple guys from Guns ‘n’ Roses and Dave Grohl. My phone was turned off and as soon as we landed, my girlfriend’s phone blew up. When she got all these text messages, she said "Glenn’s dead" and I thought she meant Glen Campbell, as we have someone in our touring group who worked on Campbell’s tour. And she said "No, Glenn Frey." I was absolutely shocked. I couldn’t figure out what had happened. She said that he had died in a hospital during a procedure, and as it turned out the medication he was taking for his arthritis had weakened his immune system. It wasn’t a life threatening procedure, he was supposed to just be out of action for three weeks and back on the road.

When I heard that he had passed, I was broadsided. I had reached out to Don (Henley) and Glenn over the last 15 years numerous times and in numerous ways. I thought we would shake hands, have a lunch without harbouring any ill feelings. The only response I would ever get would be from lawyers. I regret that Glenn and I were never able to sit down, have a lunch, have a laugh and dispel that anger.

Speaking of which, is there unreleased Eagles material in the vaults?

Yes, but it’s unfinished. It’s either, A—wasn’t good enough, or B—wasn’t finished. One of the tracks I wrote for "The Long Run" was a harder rock song for me and Joe (Walsh) to play. Glenn nicknamed it “You’re Really High, Aren’t You?”

You hear a lot about “Hotel California” all the time but you don’t hear much about “The Long Run,” period. So tell me about it.

“The Long Run” was a difficult time for us. We had put out “Hotel California” and toured the world two or three times and it was time to write more songs. I had 14 or 15 song ideas. But it was a difficult time because of this massive success. That album had such a global impact and everyone felt this monstrous pressure to raise the bar to that level or above. It’s like films. You see a monster blockbuster and then you see the follow up. It’s never as good. There was a lot of self-pressure by us. Overall, that was a dark period. It was The Eagles’ dark period.

You’re like the “Zelig” of musicians having played with so many well known people. Like teaching Tom Petty! Talk about that.

Tom and I were kids growing up in the same Florida town and I was one of the best guitar players, teaching people. Tom was just one of my students for a while. He was playing bass in a band, so he started taking guitar lessons. I helped him do some arrangements. Stephen Stills was in one of my first rock bands. The Allman Brothers saw us one night and Duane taught me how to play slide guitar. It’s funny. It was similar to the Motown experience where one little area produces a lot of talents. This one area of Florida, within a 50 mile radius had so many talents. It was quite unusual. People say there must have been something in the water. I think it was what we were smoking.

What would you do if you had 24 hours to go anywhere, see anything, and eat anything. Travel was not a factor…

I would just gather my closest friends together and hang out. I’m not a foodie. In fact, I just finished a seven day cleansing fast.