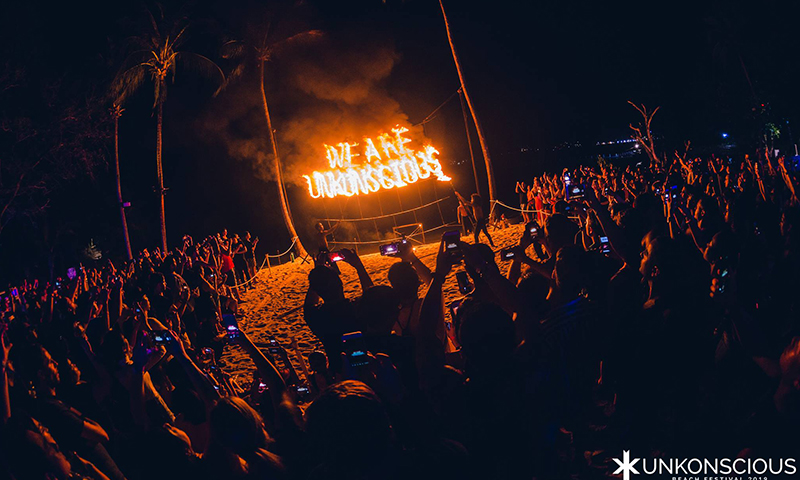 1. Hello, Lonskii. This is Huey from Hkclubbing.com from Hong Kong. Very happy to meet you at The UnKonscious Music Festival for the first time, how are you today?

Hi Huey,  I'm great, thank you! Nice to meet you too.  Welcome to Thailand and UnKonscious!

2. I remember the first time I met you, you were the DJ who played at Transmission after party and Transmission mainstage, knowing you more now and you have become the UnKonscious Music Festival organizer, what’s your motivation to do a music festival in the first place?

The story goes back to the year 2000 when I was studying in Melbourne. It was then that I fell in love with Trance music, which eventually led to a pair of Technics turntables in 2003 that I purchased to practice DJ-ing for a few hours each day. From then onwards, I started on a small career path as a Resident DJ at several clubs, such as Bubble and Hard Kandy. By 2010 I wanted to dip my toes further in the industry and I created my first event called "King of Clubs". I was expecting 100 people to turn up, but shockingly we filled up the entire venue and had a massive line leading out to the streets. I realized this was just as exhilarating as being the performer, and certainly more challenging. I simply wanted to create a night for people to enjoy.

In 2012, I finally relocated to Bangkok and the following year started a few clubs shows that included Aly & Fila and Sean Tyas. There was a huge difference in the trance scene in Thailand versus Australia and it felt like a step back for me because it was so much more difficult to convince people to attend the night. Being a small player in this field wasn't going to be advantageous for me and it wouldn't impact the scene in Asia, so I needed to go bigger. The logic was, if I brought in a big show that was immensely well-known elsewhere then there is a chance it would spark some interest in Asia as a region. I reached out to Transmission Festival in 2014 and went to see their show in Prague to discuss the possibility of bringing the experience to Asia. I partnered with Create Intelligence and we finally had Transmission in 2016 and 2017. I am extremely grateful to the Transmission and Create Intelligence teams for believing in me that this was something worth pursuing in Thailand. The experience taught me many things and somewhat prepared me for my next step in life, which was to create a newly branded home-grown Trance festival, hence the beginnings of UnKonscious.

3. How’s the concept – UnKonscious comes in mind? It is quite a funny name actually when it supposed to spell as unconscious with a C not K.

There is one Trance festival in Holland that I greatly look up to and have so much respect for. They are without a doubt, the best trance event I have ever attended. With that in mind, I always thought Thailand is an amazing destination. We are known for our rich culture, great food, amazing locations and there is so much you could do in Thailand. Regardless of what your budget is. I wanted to create a festival that would be a "total experience beyond a music festival" for trance lovers.

The name of the event s definitely interesting! Could you really forget it? I replaced the C with a K as a dedication to my wife and son who are named Katie and Kellan. In addition, my first event was King of Clubs so it seemed fitting. Hence the reason why our logo is a back-to-back of the letter K.

4. Coming into the second year of UnKonscious, compare to the first time, What’s the challenge you are facing when organizing the second music festival?

I definitely learnt a lot from the first year, so I tried to eliminate any headaches and fixed some of the problems we had in the first year. I'm definitely a micro-manager so I feel that some things are better in my control than if I were to depend on others. It was definitely a challenge to convince people to trust in an unknown brand that had an amazing line up, but I think I've built a career on building trust with people who attend my events and those that have worked with me. I had to find a way to delivery my message and purpose to audiences that have a common interest, which isn't easy but I think we're doing a great job this year.

5.  What’s the trance scene in Thailand? How’s it important to have local Thailand Trance Family, local media to support your event?

The trance scene was very small when I arrived in Thailand and it is still relatively small when compared to other Asian countries, such as Malaysia, Singapore and Indonesia. After landing Thailand in the spotlight with Transmission and UnKonscious, the scene has definitely expanded and other promoters are more confidence in holding trance events in Bangkok, such as ASOT and Genesis. We have a good relationship with Trance Family Thailand and TLT (Trance Lovers in Thailand), both are communities that have done a lot for the scene for a much longer time than I have. These guys are really passionate and determined people who have contributed greatly. This year we received a lot of attention from the media both from traditional and online sources.

6. What’s the key of making the UnKonscious Music Festival successful?

What would make this event successful is that people really enjoy the entire journey from the moment they leave their house. The excitement of travelling overseas, the adventure of landing in the tropics, venturing out to try the food, making new friends along the way, visiting one of the most beautiful private beaches and enjoying the music means you just had an experience that is beyond a traditional music festival. I think its important to constantly stay in touch with your audience and be relatable because I am very down to earth and I want people to be able to relate to me as a music lover and adventure seeker. I want nothing more than to share this experience with everyone if they are willing to take a chance on me.

Thank you. It really helps that the labels themselves and the artist help promote the event as well. I love many of these labels and it’s hard for me to suggest which my favourite is. I hope to bring FSOE, Subculture, VII, and Kearnage to Phuket one day, but I think I'll need to ask them for permission first!

8.  As a Trance DJ, International DJ promoter in Thailand, UnKonscious Music Festival organizer and a father, how do you cope with all four occupies at the same time, what’s your key of maintaining the work-life balance?

I really have my wife to thank for this. People think it is only me who does everything, but no. My wife supports my event in every way and me, in everything I do. It's hard, but doable. I spend daytime with my family and once they go to bed I have free time to work (or maybe play PubG).

9. Would you be able to share to us the most unforgettable experience in your music career?

Everything is about taking baby steps and sometimes that means taking a long time to achieve something. I won't ever forget the number of times I doubted myself, but somehow I kept going. All I wanted to be was to be a DJ, then a club organizer, and now a festival owner. This journey took me 15+ years.

Hard Trance tunes during 2000 and 2006 are my favourite, but sadly no one produces tracks like that anymore. Plus, hard trance doesn't exist in Asia and many people are into Tech Trance. I wouldn't mind doing a stage at UnKonscious or a club event that caters to that genre.

11. Thank you for your timing today and I can’t wait to go back to the dance floor and joining other trance fans from all around the world. Last but not least, do you have anything to say to the Trance Fans who are coming to UnKonscious today?

Please enjoy UnKonscious and spend the weekend responsibly. :) Thank you for attending and showing your support for the event. Let's make the world know that South East Asia can also create a great trance festival too!

#5 Best Trance Festival in the world