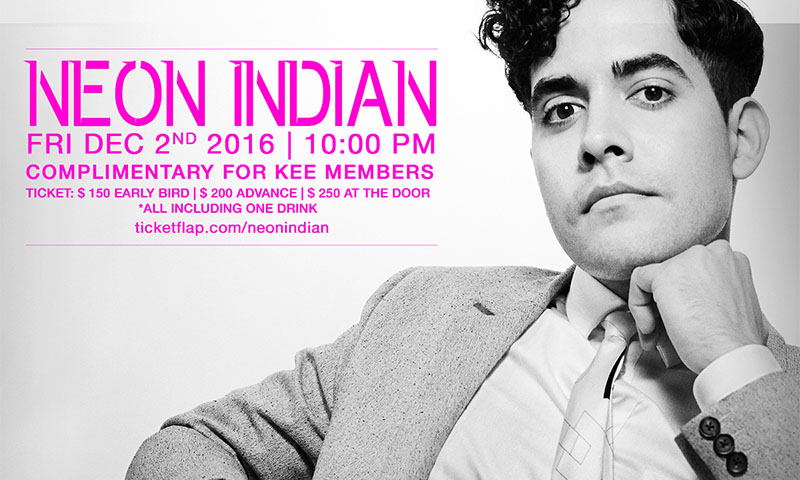 Known best for his five-piece electronic music band Neon Indian, Alan Palomo composes and fronts the group as well as performs as solo artist VEGA. After playing Clockenflap 2015, Palermo is back once again this autumn, this time spending his time behind the decks rather than the mic and keyboard at a smaller gig at Kee Club. We catch up with the artist ahead of his set.

Hi Alan, we loved your performance at Clockenflap last year. How different will your set at Kee Club be given you're performing at a more intimate space compared to a festival?

Well for starters it’ll be a DJ set as opposed to the live show at Clockenflap. One [part] is my own material performed with four other dudes and the other is a curated selection of other people's stuff I love.

You first started out in around 2010 glued to the chillwave genre that was popular in the day. Where do you think chillwave is these days, and do you still identify with this genre?

I never identified with the genre… It felt shoehorned by journalists for editorial click bait and made me out to be carrying some torch for something I didn’t even entirely understand. I’m glad the chill wave editorial M.O. died a few years ago. It suddenly and decidedly became UN-cool and I felt completely liberated. I was now able to just continue making the music I wanted to make in my own little island and not worry about some "collective statement" or something equally dumb.

What are your thoughts on Hong Kong and the audience/crowd here from when you visited last?

The vibe in Hong Kong was high energy and all love. I was definitely humbled. It's always surreal to visit a new place on the other side of the world and hear your audience singing the songs you wrote back to you.

What was your favorite memory of 2016 so far?

My favorite memory of 2016 was probably a dancing at 5 in the morning at Primavera Sound Barcelona to DJ Richards closing set. The sun came up over the shore’s horizon line and no one even noticed. They just stayed in motion. It was truly something to behold.

Any new music we can look forward to at this upcoming gig at Kee Club? What new projects can we expect from you in the coming months?

Keeping that stuff under wraps for the time being. [My latest album] VEGA INTL. still needs to come to a close, touring-wise. I've been focusing on some film score related projects as of late which has been super fun and engaging.

KEE Club and FOB are very excited to host the amazing Neon Indian on Dec 2nd. Neon Indian's unique sound is that of a Carnival Cruise night based around New York's Danceteria, circa 1982, a place and time of glaring blight as well as utopian all-night clubs where Synth-Pop, Disco, Funk, R&B, and early Hip-Hop were feeding off one another. Prepare to be amazed for a very rare DJ set by the Alan Palomo aka Neon Indian.

*all including one drink