Tokyo street style meets crisp Scandinavian fashion sense
Once upon a time, an unexpected chemical reaction in an old weavery released a batch of plump black Monkis into the sky. Soaring high from the still-smouldering chimney, the tiny creatures floated into the illusory universe known as the Monki World. The Monki saga is a wild hotchpotch of wondrous adventures complete with origami birds, a butterfly choir, turbine flowers and mysterious chemicals.

“The hard-man image is a very celebrated image in Scotland. Metrosexual men … are fairly few and far between,” leading psychologist Dr Ewan Gillon told the Herald.

“Rather than being able to engage with ourselves and our feelings, we tend to express ourselves in acting out ways. We tend to drink, take drugs, do risky things. Alcohol is a classic way of numbing our feelings,” he continued, “If you talk about feeling sad or worried, you are often labelled a sissy.”

ART & COPY is a powerful new film about advertising and inspirtion. Directed by Doug Pray (SURFWISE, SCRATCH, HYPE!), it reveals the work and wisdom of some of the most influential advertising creatives of our time -- people who’ve profoundly impacted our culture, yet are virtually unknown outside their industry. Exploding forth from advertising’s “creative revolution” of the 1960s, these artists and writers all brought a surprisingly rebellious spirit to their work in a business more often associated with mediocrity or manipulation: George Lois, Mary Wells, Dan Wieden, Lee Clow, Hal Riney and others featured in ART & COPY were responsible for “Just Do It,” “I Love NY,” “Where’s the Beef?,” “Got Milk,” “Think Different,” and brilliant campaigns for everything from cars to presidents. They managed to grab the attention of millions and truly move them. Visually interwoven with their stories, TV satellites are launched, billboards are erected, and the social and cultural impact of their ads are brought to light in this dynamic exploration of art, commerce, and human emotion.

On Thursday 1st of July 2010. Experience the heat of summer and the thrill of Marde Gras on one fantastic night. Exclusive Mobile Tanning specialists, Club Etoile present “Tan-talizing Carnivale”.

Waste Disposal experts in Germany revealed this week that they’ve started exposing raw sewage to prolonged bouts of Mozart, after discovering the microbes break down quicker when exposed to his classical music.

“My theory as to why it works is that Mozart managed to transpose universal laws of nature into his music,” sewage musical maestro Anton Stuck told the Guardian, “So why not microbes? After all they’re living organisms just like us,” he surmised.

Straight from the 70’s adidas archive, the Nizza is a classic old-school basketball shoe that is both iconic and timeless. The original Nizza featured a canvas upper, half rubber toecap, and a round silhouette, imbuing the shoe with a clean, effortless style. Primary developed as a well-priced shoe model for sport and leisure time activities, the Nizza also established as a basketball shoe in the 70s.

hkclubbing.com and adidas are giving Hong Kongers the opportunity to win a pair of adidas Classic Vulcanized Mid. A next-generation take on an adidas classic hits the street with a fresh face. The adidas Classic Vulc 2 Mid takes that vintage vulcanized outsole and skater vibe into new territory with a range of colors and a modern step.

Internationally acclaimed Japanese restaurant and nightspot zuma at The Landmark and sister restaurant ROKA, a cosy and sociable Japanese robata grill in Pacific Place, are partnering with the Clean Air Network’s (CAN) campaign against Hong Kong’s air pollution.

Both restaurants are joining the cause by having their staff wear t-shirts in support of the Clean Air Network’s initiatives, as well as distributing pollution information with a petition among guests from February 16–28.

Design and win a pair of adidas mi originals

Adidas and hkclubbing.com are giving Hong Kongers the chance to design their very own adidas 'mi Originals' shoes and have the opportunity to win their design if voted the best. We will choose the best and most interesting designs to go on our Facebook page, where the person with the most 'likes' on their design will get their shoes made!

Hong Kong for Haiti at Zuma 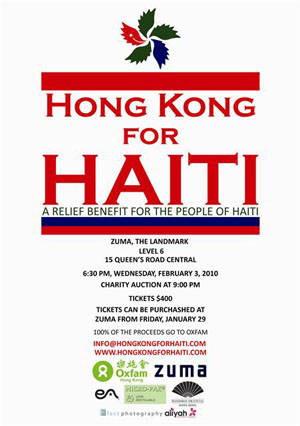 "Hong Kong for Haiti" has been organised by a group of young professionals living and working in Hong Kong in order to raise funds for the relief work in Haiti and ensure that the tragedy unfolding there remains in the public eye.

Taking place on 3 February 2010 between 6.30pm and 11pm, Zuma Restaurant and Bar have kindly donated their premises and staff to host "Hong Kong for Haiti". 100% of all ticket revenues and funds raised will be channeled directly to Oxfam Hong Kong emergency relief and rehabilitation works in Haiti.

Your ticket will ensure that you receive one drink free of charge, canapes, the sultry sounds of DJ May and the chance to support the people of Haiti.

Corporate sponsors looking to support the event financially, by way of "gifts in kind" or in any other form, please contact sponsors@hongkongforhaiti.com.

All other queries should be directed to info@hongkongforhaiti.com.