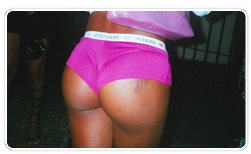 Diesel is proud to launch (with, literally, a BIG BANG) the third and final chapter of Issue Four of its seasonal ’zine, “BRAVE,” by presenting an exhibition by American photographer extraordinaire, Terry Richardson.

Notoriously known to push the boundaries of fashion photography, Richardson, in his first ever visit to Hong Kong, will be showcasing a brand new body of fresh work in his exhibition, titled “From Rio to Hong Kong.”

In May 2007, Richardson spent a week in Rio de Janeiro, Brazil where he shot artists, famous and anonymous locals, in unedited poses. Conceptualised and produced by Diesel’s team in Brazil (who sponsored the resulting book titled “Cidade Maravilhosa (Wonderful City),” the project gathered famous local names such as Camila Pitanga and Dercy Gonçalves, as well as random personalities such as male prostitutes and transvestites, who were shot at “funk ball” parties, “favela” slums and other interesting trademark locations. True to Richardson’s controversial style, the resulting images fuse the sexual, sensual and natural with spontaneity and humour.

As part of his Hong Kong exhibition, Richardson has invited local artist, Michael Lau, to contribute to the exhibition. Lau is best known as one of the world’s most cult-famous toy designers, as well as being an artist and illustrator. This is the first time the two talents will collaborate.

Having previously shot two Diesel advertising campaigns, including the award-winning SS07 campaign, titled “Global Warming Ready,” Richardson has a strong relationship with the Italian fashion-lifestyle brand. To forge this further, he will also be shooting subjects for a Hong Kong version of the Rio book during his stay here at end-November 2007. What to expect? “The best thing is to take the pictures to the limit,” he once said of his creative style.

Inspired by three words, “Only The Brave” — the Diesel corporate identity — “BRAVE” is a seasonal ’zine that’s different in attitude, content and creativity. With past issues in print form, “BRAVE” has evolved into a real, live, physical experience. Themed “Alive,” Issue Four is a three-part interactive journey through art, music and fashion, running from October to December 2007. Chapter One was launched in October with a Wing Shya photography exhibition and AliveNotDead.com music showcase. In November, Chapter Two highlighted four internationally renowned artists from New York — Suitman, José Parlá, Rostarr and Deanne Cheuk.

Presented by Diesel and hosted by Terry Richardson and Michael Lau, the “From Rio to Hong Kong” exhibition will be launched on Friday, November 30, 2007 with a private event. Listen out for more details