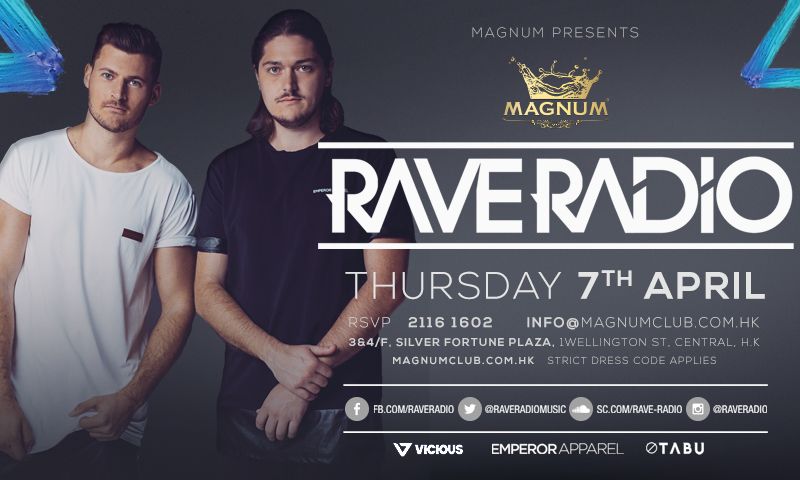 Rave Radio are the ones to watch in 2015. Known for relentlessly unleashing mind-blowing dance floor weapons, each original production outshines the last. Their live performances are second to none jam packed with originality with their duo live show comprising of a live DJ, MC and Drumpad performance. Rave Radio provides the soundtrack for ravers all around the world with their originals and remixes hitting dance floors in every corner.

2014 saw their single ‘Rumble’ championed by artists like Kaskade, Thomas Gold, Dyro and inspired Martin Garrix to produced his very own mashup with Calvin Harris’ ‘Summer’. The track was dropped main stage at globally renowned parties Ultra Music Festival and Sensation to name a few. Their follow up single ‘Mugatu’ hit no.5 on the ARIA Club Charts & gained support on Hardwell On Air.

As producers Rave Radio have collaborated with international stars including Chris Willis of David Guetta fame (‘Love Don’t Let Me Go’, ‘Love Is Gone’ & ‘Getting Over You’). On the official remix front, Rave Radio have reworked titles by Akon, Pitbull, Lil Wayne, Stanton Warriors, Kelly Rowland, Lil Jon, Havana Brown and The Potbelleez.
In their home country, the Gold Coast based duo have been voted the #1 DJ’s in QLD (ITM Awards) as well as #9 overall. Their podcast ‘Midnite w/ Rave Radio’ compiled with today’s best and upfront sub-genre house music is fast approaching its 100th episode. They have mixed compilations for labels such as Universal Music and Ministry Of Sound, garnering the top spot on the iTunes dance chart in Australia.

You can catch the guys performing live in Australia’s premium venues including HQ Complex, Home Nightclub, Family, Gilligan’s & Billboards. Internationally the guys have been on tour’s of Asia & America, playing shows from New York to Brazil, Hong Kong to Taipai.

For all updated events visit: http://bit.ly/RaveRadioShows