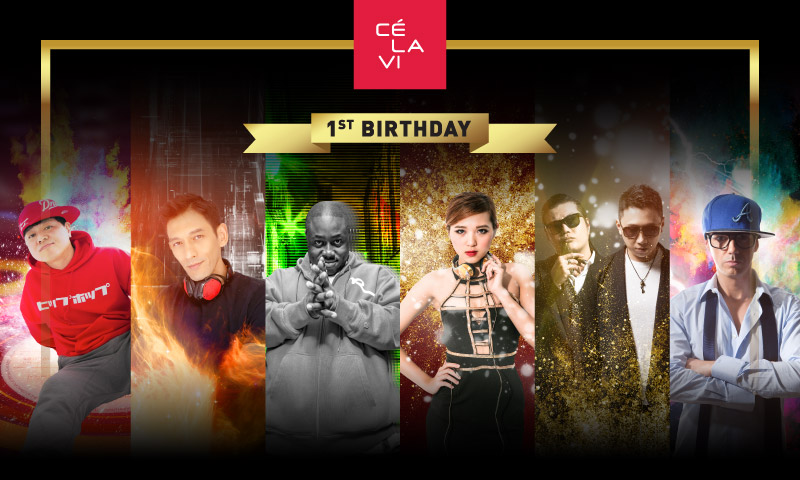 One of Hong Kong's most iconic nightlife destination is turning one! And that's how you realise time flies... In the true spirit of partying, CÉ LA VI Hong Kong has lined up a series of amazing DJs to keep you entertained and dancing for the whole month. Read on and mark your calendars!

Returning for a record 3rd visit VDJ Ta-Shi will hit the decks and do what he does best this Friday 2nd September, 10PM – late.

An icon in the DJ sphere Ta-Shi, continuously won Vestax, ITF and DMC Japan three champion competition in 1992. In 1998, DJ Ta-Shi performed in a concert for James Brown, the father of funk, and acquired a standing ovation from the man himself. DJ Ta-shi was also invited by Dr.Dre and Snoop Dogto tour with them in Japan.

Antwone started his career in the mid 90s after being grasped by the allure of the underground rave movement in Vancouver. Influenced by old funk classics and the 70s/disco era he fuses his flavour from these musical genres with the latest cutting edge House sounds.

Shortee Blitz is the ambassador for Hip Hop in the UK. With two weekly radio shows on Kiss FM, a role as a presenter on Kiss TV, a Ministry of Sound residency, and columns in Touch, Hip Hop connection and iDJ, Blitz has cemented his place as one of the most influential figures in UK music.

After an incredible appearance back in May DJ Ellie returns to rock our club and celebrate our Birthday month with us! Asia's most sensuous female DJ and Resident DJ at Lobby Club, Taipei Ellie will take this Radiostar to the next level!

Back for more ! DJ Lucky and MC AK will return during our birthday month after their mind blowing set earlier in the year!

MC AK has shared the stage with Ciara, Fatman Scoop and DJ Kool whilst DJ Lucky has performed at the Ministry of Sound in Taipei and other prestigious clubs around Asia.