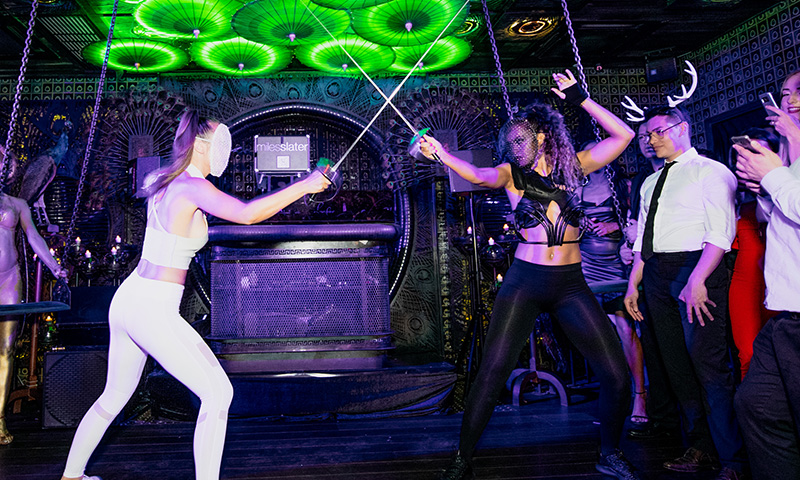 Ophelia – the exclusive performance venue for the sophisticated and recognized as Hong Kong’s hottest entertainment and performance destination, celebrated its 2nd anniversary with a tribute to a household name, more specifically, his female counterparts.

Bond girls took centre stage this time. Femme fatales such as May Day (A View to Kill, 1985), Vesper Lynd (Casino Royale, 1953) and Octopussy (Octopussy, 1983) were inspirations to our cast of fiercely strong female performers. The night was unveiled by a fencing dance, revisiting the famous scene in Die Another Day (2002). At the DJ booth, Olivia Dawn and Miles Slater amazed the crowd with a mix of deep house tunes infused with classical violin and urban contemporary. As the night went on, guests are revealed to various visual stimulations taken from the Bond series, and drawn deeper into the sensuousness of Ophelia.

Appearing in all black or sparkling body suits, the Ophelia muses have decided to take on Goldeneye (1995) and Diamonds Are Forever (1971), interpreting the fearless female characters on the night. They intermingled amongst the crowd, nonchalant to the gaze of others, responding only to admirations and appreciations.

Over the previous year, Ophelia has set some daring and artistic milestones – hosted Courtney Act, the international drag entertainer and television personality for a night. The pop singer brought along an unforgettable performance and the message of inclusivity; various showcases of artistic talents in the VIP lounge Opium Den, such as collaborating with Nicoline Aagesen (My Camera My Rules) to create a provocative photo exhibition. Together with its own sensual performances, Ophelia celebrates creativity and diversity within art.

Stepping into its third year, Ophelia will continue to bring one-of-a-kind experience to Hong Kong nightlife with its iconic theatrical surrealism. With every visit, guests can expect the unexpected – a night of diversion and pleasure.