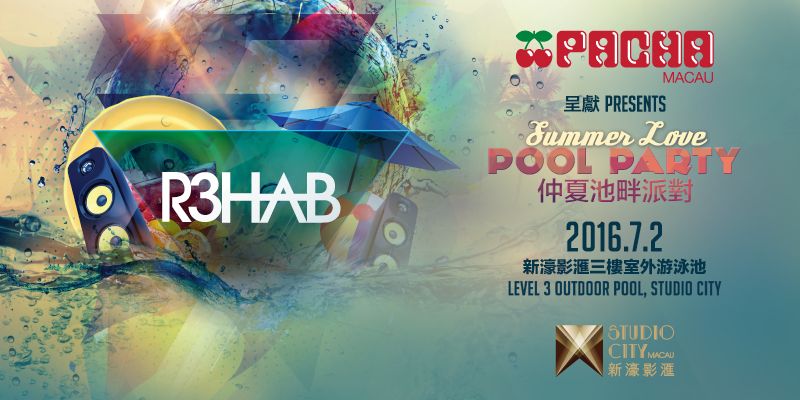 Headlining the second-ever “Summer Love” Pool Party at Studio City, the Asia’s Entertainment Capital is set to turn up the heat again by bringing to Macau one of the world’s biggest DJ’s and the world’s biggest remixer – R3HAB to deliver an incredible performance on Saturday, July 2.

The second of three sizzling “Summer Love” pool parties at the Hollywood-inspired, cinematically-themed integrated entertainment resort will be headlined by R3HAB, who is incredibly recognized all over the world performing multiple times at Coachella and over 218 million SoundCloud streams, 140 million Spotify streams. R3HAB is known for his original material, internationally acclaimed remixes, and collaborations with top artists like Taylor Swift, Rihanna, Beyoncé, Katy Perry, John Legend and Calvin Harris.

Starting from 2:30pm until 10pm, Studio City’s outdoor pool paradise will open to party-goers to enjoy the superlative pool party in town. In addition to the headline performer R3HAB, an exciting cast of international DJ talents will also be there to warm up the crowd.

Guests looking to party the whole night away can join the official “Summer Love After Party” held at Studio City’s Pacha Macau, the first and only Pacha club in Greater China. The “Summer Love” Pool Party guarantees a wild night out that no one would want to miss.

Asked about the upcoming gig, R3hab said, “I can’t wait to return to Studio City and Pacha Macau again this summer after my performance in Macau on New Year’s Eve last year. The crowd is amazing there and I feel Studio City’s decor and the crowd’s high energy is the perfect backdrop for a great time!”

Tickets for the second “Summer Love” pool party featuring R3HAB is now on sale with early bird tickets available until June 19 for HKD/MOP350 and HKD/MOP 450 (pool party plus after party package), after which tickets will be available online and at the door for HKD/MOP450 and HKD/MOP550. Table packages and cabana packages are also available.

The last “Summer Love” party will take place on August 6 and the featured star will be announced shortly.

Party-goers can take advantage of the two limited-time hotel packages to party the night away and get recharged at the glamorous Studio City Hotel! Starting at HKD 2,198* and HKD 3,698* respectively, both packages are available until June 30 2016 and include two admissions to the July 2 “Summer Love” Pool Party and Pacha Macau, one night accommodation at either Celebrity Tower or Star Tower, two Golden Reel tickets, a HKD 100 entertainment voucher and complimentary Wi-Fi access. The higher priced package also offers Sunday brunch buffet for two at Spotlight and late check-out at 1pm.