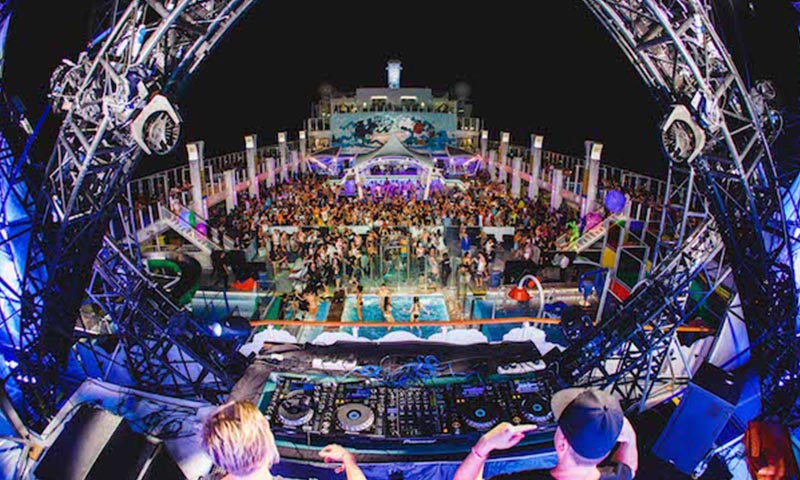 Three winners will stand a chance to perform sets on board during IT’S THE SHIP from 4th to 7th November 2018. 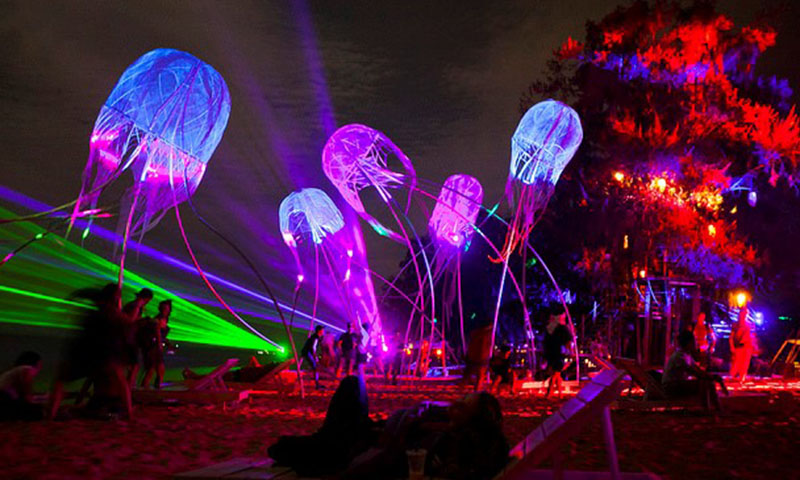 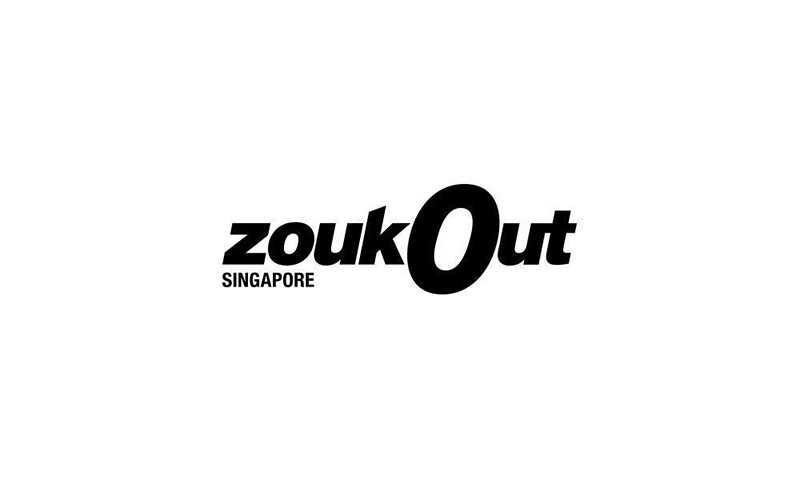 Dimitri Vegas & Like Mike will be having their debut performance in Singapore at  ZoukOut 2018! The party will take place on Siloso Beach, Sentosa from the 8-9th December.

For the latest updates visit:
https://www.facebook.com/ZoukOutOfficial/ 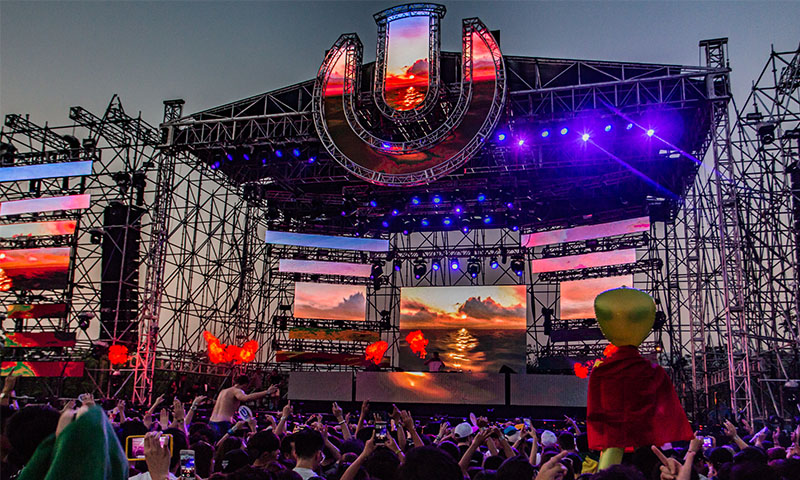 It’s less than 30 days until the third edition of Road to Ultra: Hong Kong and its full lineup has been revealed. Let’s take a look below.

LOOPTOPIA Music Festival returns to Taiwan in 2018 with 50+ Acts 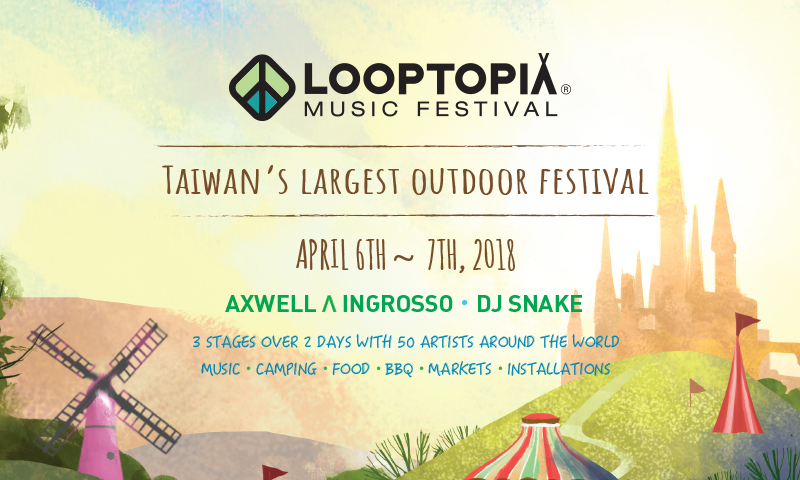 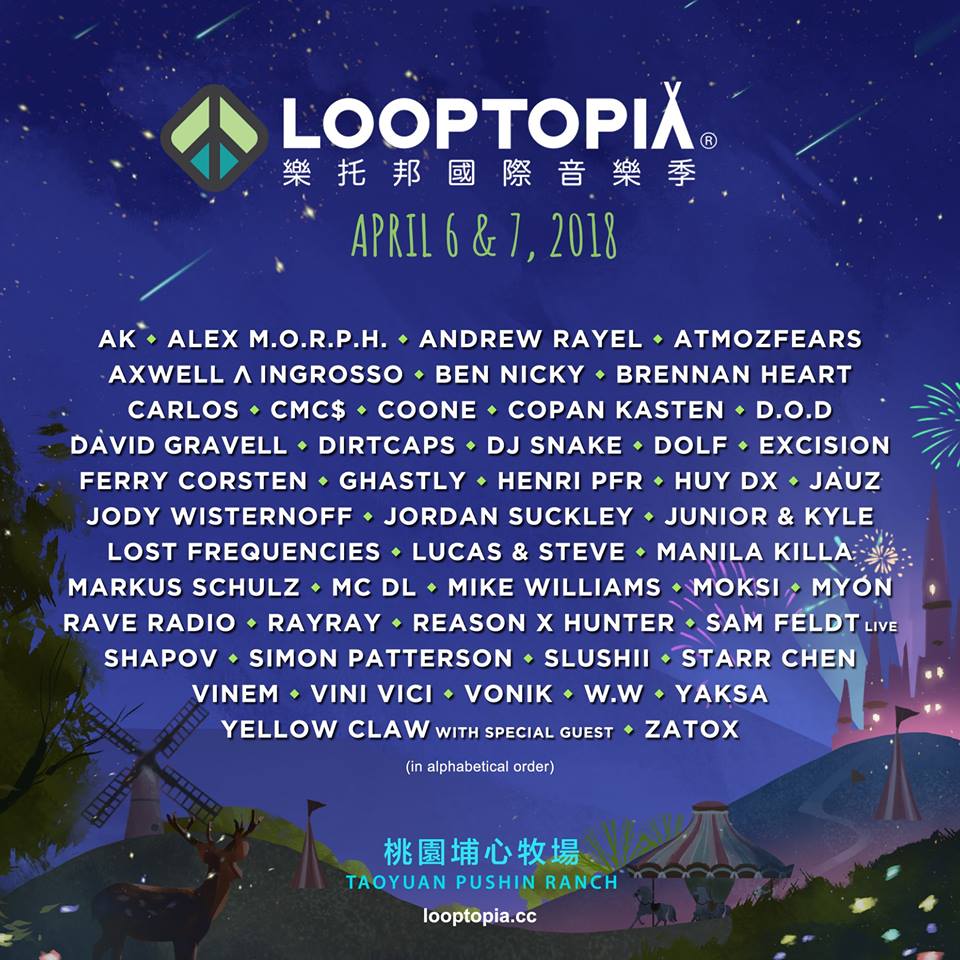 After a triumphant debut to a jaw-dropping crowd of more than 32,000 for its inaugural festival last year and solidifying its position as the first and largest homegrown electronic music festival and entertainment wonderland in Taiwan, LOOPTOPIA has announced its return to the idyllic island and with it comes a colorful line-up of 50 world-class acts including talent like AXWELL Λ INGROSSO, DJ SNAKE, YELLOW CLAW, LOST FREQUENCIES & more, 3 elaborately redesigned stages and new partnerships with some of the world’s leading brands including a Q-DANCE takeover. Taking place on APRIL 6 & 7 in the lush grasslands of the TAOYUAN PUSHIN RANCH and executed by Taiwan’s leading entertainment and hospitality group theLOOP, LOOPTOPIA is once again set to offer a festival experience that is inspired by other all-encompassing and fully immersive festivals like Mysteryland, Tomorrowland and EDC but with its own unique identity.

LOOPTOPIA has been working tirelessly all year to lock down 50 of electronic music’s heaviest hitters. Phase 1 of the line-up once again sees artists run the gamut through the entire spectrum of electronic music including EDM, tropical house, trance, progressive house, psytrance, trap, dubstep, hardstyle and especially bass music – which will be a big focus of the event this year. Confirmed acts this year include AXWELL Λ INGROSSO of Swedish House Mafia fame, Grammy-nominated French DJ and producer DJ SNAKE, the world’s most in-demand tropical superstar LOST FREQUENCIES who will play in Taiwan for the first time, Barong Family label heads and trap titans YELLOW CLAW, Dutch   trance phenomenon FERRY CORSTEN, Belgian hardstyle sensation COONE, mash-up monster and psytrance selector BEN NICKY, the head banging king of Canadian bass EXCISION, iconic hardstyle DJ and producer BRENNAN HEART, San Francisco based master of genre blending extraordinaire JAUZ whose high-profile fan base includes Skrillex, Borgore, Zedd and Diplo, German-American trance mainstay MARKUS SCHULTZ and RAY RAY, who has risen to the occasion after becoming Asia’s best export as far as bass music goes. In addition, the organizers have carefully curated a colorful line-up that gives center stage to a plethora of regional talents making LOOPTOPIA stand out from other festivals in the region that are focused almost entirely on international acts. The full line-up will be announced soon and you can see the full first phase line-up below.

LOOPTOPIA will bring back its 3 signature stages that have been extravagantly redesigned by world renowned stage designers, not that they needed it. The Kingdom of LOOPTOPIA, also known as the main stage, returns with a glossy makeover and promises PLUR emanating from its pillars in the form of non-stop melodies by some of the biggest names in electronic music. The White Palace is an ode to theLOOP’s classic 2F White Party and will carry festivalgoers through all eras of uplifting trance and progressive music where everyone can experience what it’s like to be reborn into the light. The Monster Tower brings back to life Asia’s largest costume party in that it embodies the spirit of Halloween Massive and promises to be dark, unique and full of personality. Not only is this stage is dedicated to hardstyle, trap, bass and dupstep but it will be co-hosted by Q-DANCE, a Dutch company responsible for some of the biggest hardstyle, hardcore and hard trance events and festivals in the world like Defqon.1, Q-Base, Qlimax and X-Qlusive.

On the festival’s return and focus on expansion, organizer Alan Hsia said: “A diverse and intricate line-up over multiple stages, expanded camping, a built-up artist village, proper F&B at LOOPVILLE and most importantly the crowds are the factors that will make this year even bigger and better. We are now using LOOPTOPIA as a platform in Taiwan to land artists, labels, and brands to introduce and increase interactivity with the best festival crowd in Taiwan.  The collaboration with Q-Dance this year is just a beginning.”

Furthering the festival’s reach internationally even more is the return of Rukes, who is one of the world’s most prolific dance music photographers and regularly jets around the world with artists like Skrillex and Zedd, can be seen in Rolling Stone, Vanity Fair, DJ Mag and US Weekly and is Ultra Music Festival’s go to photographer year after year.

​
​LOOPVILLE will return to the grounds this year and once again play host to a whole world of discovery with an extensive array of activities and lifestyle offerings such as interactive art installations, massages, yoga, aromatherapy, Chinese face painting, tattooing, graffiti and an aboriginal arts center. Additions this year include henna tattoos, a pop-up DJ studio and several new stalls selling clothing and accessories. Some of the island’s most esteemed restaurants and eateries will be offering cultural delicacies and exotic aromas at the festival, where an expanded area of food carts will feature an incredible range of modern western snacks including Japanese, Mexican, Thai and Indian as well as greater selection of Taiwanese night market fare and even traditional tribal roasts.

Away from the stages, LOOPTOPIA has been thrilled to finally shift attention onto Taiwan. The island, which is often referred to as Formosa (meaning beautiful island in Portuguese), has a vibrant music scene and is oft lauded as one of the friendliest, safest, cheapest and most beautiful countries in Asia. Taiwan boasts seven national parks and the festival experience could easily be turned into a mini-holiday. Taipei is easily accessible by a single flight from almost anywhere in Asia and is serviced by several low-cost carriers such as Jetstar, Peach Airlines, Air Asia, Tigerair, Cebu Pacific and more. Taking place at the sprawling Taoyuan Pushin Ranch, the grounds are located just 30-minutes from central Taipei and 10 minutes from Taoyuan International Airport and are accessible by car, shuttle and the ultra-fast High Speed Rail (HSR). The site itself is lush with forests, greenery and a lake as well as on-site camping, BBQs, cabins, showers and other amenities. The organizers spent 3 years scouting and securing the site and LOOPTOPIA is the first music event to take make use of the space and having locked down exclusivity to the site, it intends to grow the festival each year making full use its 50,000-person capacity. Similar to last year, no expense will be spared in delivering an outstanding event with flawless sound and lighting, mesmerizing pyrotechnics and top-notch designs that will frame the festival’s three behemoth stages as LOOPTOPIA continues in its endeavor to cement Taiwan’s position as an entertainment hub within the international dance music community.

Hailed as Taiwan’s entertainment powerhouse, theLOOP have been at the forefront of Taiwan’s electronic music scene for over a decade and a half. The production team has executed over 40 large-scale music events all over the island and welcomed over 400 international acts and tens of thousands of guests at native events like Halloween Massive, 2F White Party and Spring Love as well as through collaborative endeavors with international brands like Godskitchen, Sensation and Armin Only. theLOOP are also the creators of nightlife brands like the fabled LUXY nightclub in Taipei, its award-winning successor OMNI and award-winning mega-lounge KOR.  With over 15 years of experience delivering world-class events and a thorough understanding of the importance in small details, LOOPTOPIA is a natural culmination for the brand after shaping Taiwan into an EDM paradise that is finally ready to become a landmark for international music festivals in Asia.

In an effort to streamline the ticketing process from point-of-purchase to entry and also reduce its carbon offset, LOOPTOPIA has developed its own app called ‘LOOPtix’ where tickets can be purchased from anywhere in the world on the app. Purchases via the app also come with loads of benefits.

VVIP table services are available. Please contact +886 966 136 000 or send a message to the official LOOPTOPIA Facebook page for more information.

There will be shuttle busses between the Taoyuan Pushin Ranch and Sun Yat-Sen Memorial Hall MRT Station. Tickets must be purchased separately for journeys in both directions. A ticketing website will be available soon with the cost, schedule and rules of purchase.

Camping information: The number of on-site camping packages have doubled this year and are available for purchase starting at $6,600 TWD/4-6 people here.

Hotel information: LOOPTOPIA has partnered with several hotels in the area to offer special rates for festivalgoers. Find the comprehensive list here. 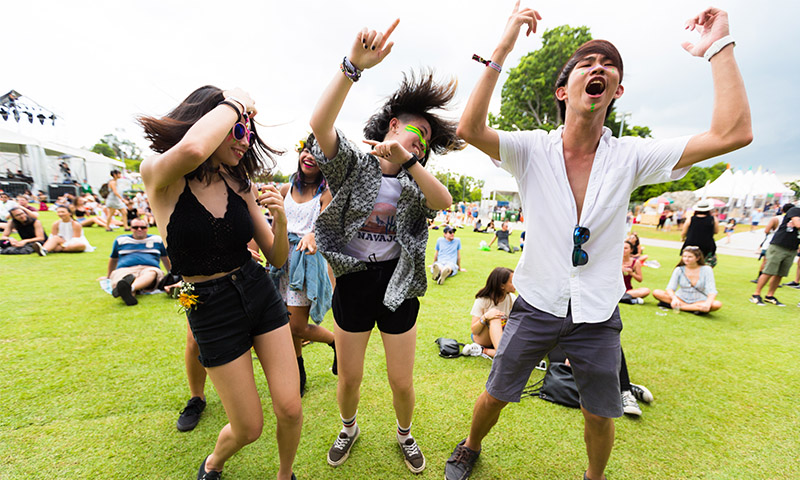 A gentle reminder that it’s already the last quarter of 2017 so don’t be surprise if you hear more news of 2018 events – The Laneway Festival 2018 which take place on 27 January 2018 in Singapore is one of them. The international music festival has just announced the lineup as below. It’s still not too late to plan a winter escape (wink). 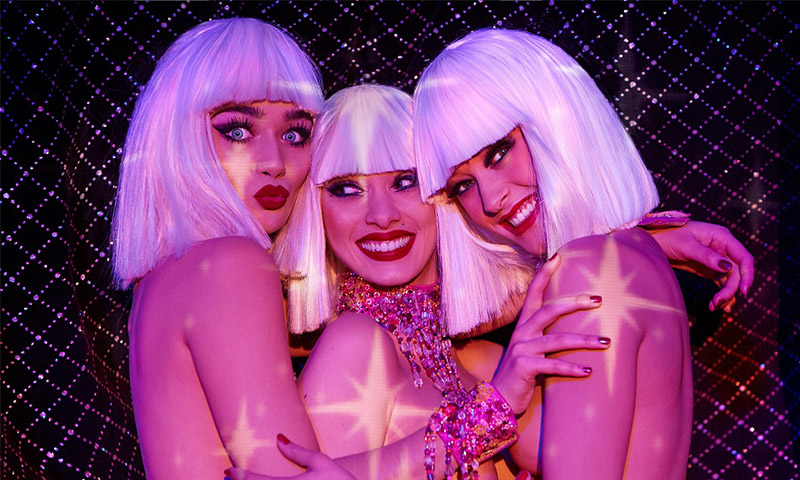 The fabulous Crazy Horse Paris is coming to Macau! From 1st – 12th November, the legendary cabaret ‘Forever Crazy’ will take place at The Parisian Theatre, The Parisian Macao for the very first time.

After months of speculation and excitement, Asia's Largest Festival at Sea, It's The Ship, today (17th August) reveal their first phase line up. Due to set sail from Singapore to Phuket on November 17, those lucky enough to get hold of tickets will be treated to the hottest rising and mainstay international talent across the dance and hip-hop spectrum.

Flume and Marshmello Announced as Headliners for ZoukOut in Singapore 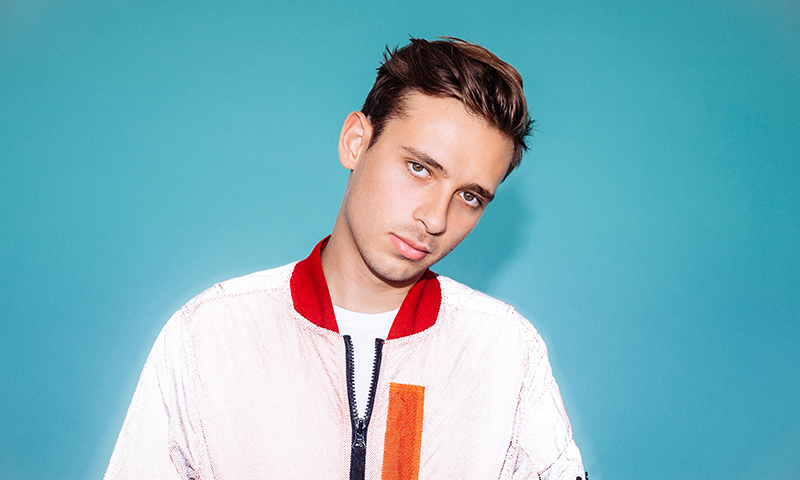 It seems like Flume and Marshmello will be quite busy in Asia this year – aside from appearance on Creamfields 2017, both phenomenal DJs and producers are confirmed to be the first headliners of ZoukOut in Singapore as well, which will take place at Siloso Beach on 8-9th December. 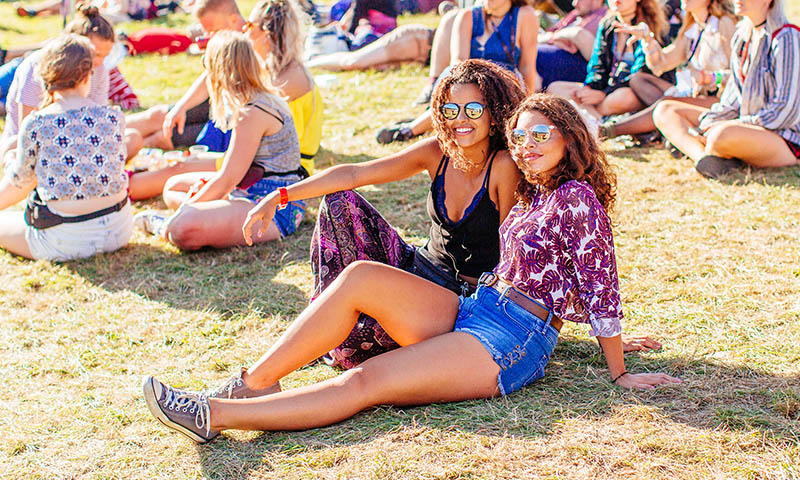 Aside from Djakarta Warehouse Project, there’s another exciting music festival coming soon - Award-winning UK festival Bestival will be launching for the first time in Indonesia this year with Bestival Bali from Sept 30 - Oct 1. Check the lineup below!