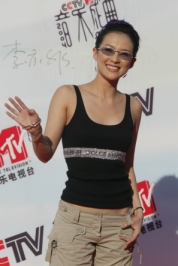 The Beijing Olympic Indoor Stadium was illuminated with international and local stars celebrating the sixth spectacular CCTV-MTV Music Honors in Beijing, China on 24 July 2004. Over 100 artists dazzled the 4000 strong audience with their vocal prowess and star presence. Joined by a star-studded line-up of international and Asian artists from China, Hong Kong, Taiwan, Korea, the ceremony was jointly hosted by multi-talented Taiwanese artist Harlem Yu, together with MTV VJ Li Xia and CCTV presenter Dong Qin.

The CCTV-MTV Music Honors pays tribute to artists who have made significant contribution to Chinaâs music development.   This yearâs world-class production boasts an additional 2 awards that gave recognition to the behind-the-scene heroes of outstanding lyricists and composers.

Some notable winners include:

Kick starting the night was an energetic performance by Taiwanese host Harlem Yu, who rapped with Kung Ling Qi and E Band to the evergreen favorites of Swedish pop legends ABBA. The upbeat and infectious tunes soon got everyone moving to the rhythm. Other highlights of the show included:

-         Micheal Learns to Rock made a stunning rendition (âTake me to your hearâ) of Canto pop king Jacky Cheungâs famous song âKiss goodbyeâ.

Sponsored by IT company Tsing Hua Tong Fang with official supplier Motorola, the three-hour event will premiere on MTV China at 11am on 14 August 2004 and repeated through to October. The awards show will also be aired on MTV programmes âMTV Tin Lai Cunâ, âMTV Englishâ, âMTV Stageâ, âMTV Countdown Showâ as well as CCTV1 and CCTV4. Portions of the show will also be available via MTVâs channels around the world and through syndication, reaching a potential viewing audience of over 400 million households in 166 territories.