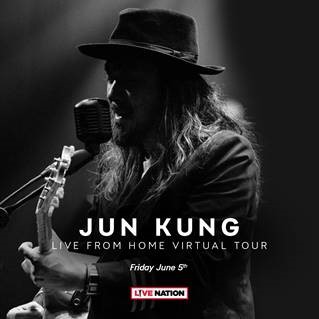 Jun Kung announces the Live From Home Virtual Tour presented by Live Nation on Friday, June 5, in an effort to reach his fans during the time of social distancing.

An epic drummer, singer-songwriter and music producer, the Macao-raised, Hong Kong-based musician has been a mainstay in the local music scene. Jun began his professional drumming career at the age of 14. A proud alumni of the “Drummers Collective” in NYC, Jun is one of the most hired drummers in Hong Kong, both in studio and on stage.

In 1999, Jun released his first solo album "Here and Now", which earned him the “Best New Artist Award” by Commercial Radio Hong Kong. Since then he has released several notable titles, including “No Where Man”, “Past Future Present Tense” and the recently released “Supermarket Music Vol.1”. His original songs “Here to Stay” for “Merry-Go-Around” and "Leung Sum Fa" for “Hi, Fidelity” had won him the “Best Original Film Song” award in the 30th and 31st Hong Kong Film Awards respectively.

Heralded as “the drummer” in Hong Kong, Jun has toured around the world over the years with regional icons, including Jacky Cheung, Coco Lee, Eason Chan, Faye Wong, Sandy Lam, Khalil Fong and many more. One of the record-breaking marathon tours was Jacky Cheung's “The Year Of Jacky Cheung World Tour '07”, with over 105 concerts around the world in over 57 cities. Jun’s outstanding performance has earned Jacky Cheung’s recognition as “the best drummer he’s ever performed with”.

About Live From Home

Live From Home is Live Nation’s all-new virtual music hub where fans can discover the best live streams, artist content, new music and more from around the globe, all in one place.