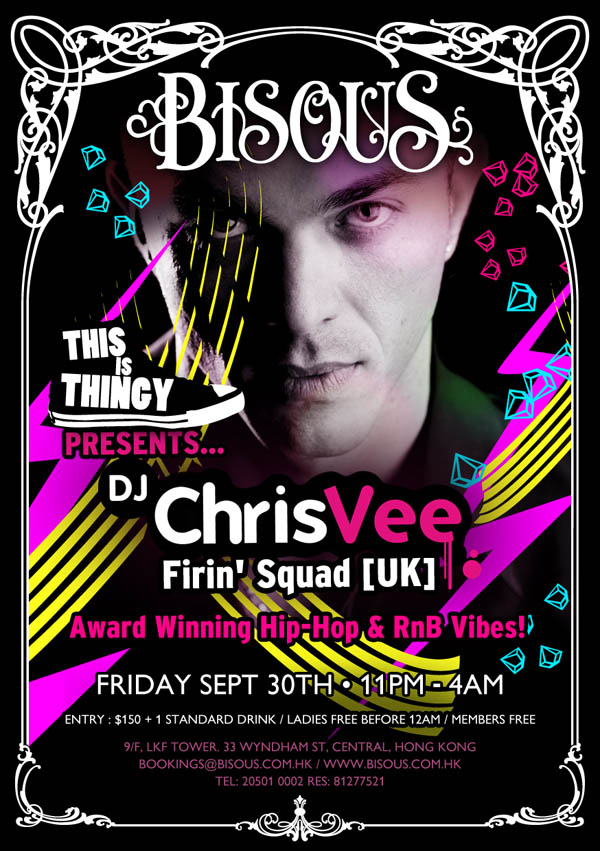 BISOUS & THIS IS THINGY Presents -

DJ Chris Vee & Firin’ Squad continue to fire-up weekends on Choice FM in London with their mix of the hottest urban club tracks and celebrity interviews with the finest talent from the UK urban music scene, including the likes of Tinchy Stryder, Chipmunk, Kano and Roll Deep.

Chris Vee is no strangers to high profile events having played at many of London’s biggest music festivals, such as Notting Hill Carnival and The Prince’s Trust Urban Music Festival. He has supported the likes of Busta Rhymes and Ludacris on stage, and has been joined during sets at some legendary club nights for spontaneous performances by the likes of Jay-Z, Missy Elliot, Mark Ronson and P Diddy.

There have been numerous awards along the way. In 2006 they received a nomination for Best Radio at the Urban Music Festival, and they received the industry’s highest accolade by winning Gold at the Sony Radio Academy Awards in 2007 and were nominated once again in 2008, for their ground- breaking Firin’ Squad Unsigned Podcast. They have worked with some of the biggest music and entertainment brands in the world including MTV, Ministry of Sound, Twice As Nice and AEG Live.