The Second Annual Avant G’Art Party – Out of Control 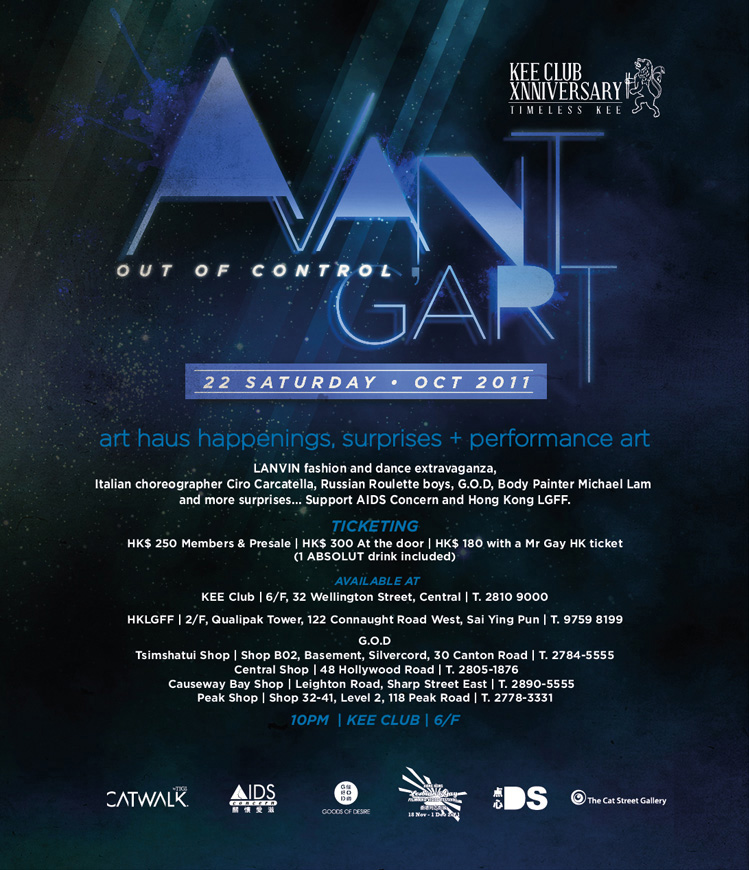 Goodbye, inhibitions; Hello, late night fervor and fun. One of the city’s wildest nights is coming back to KEE Club.

Models in beguiling BECCA make-up will shake up the dance floor in swell-e-gant outfits from LANVIN’s Autumn/Winter 2011 Male Collection while other body-painted male beauties will showcase a new collection from G.O.D.
Hostess with the Mostess Miss Grace Underfire, body painter Michael Lam and contortionist Claudia Mesyasz will spice up the night – as will dancer Pamela Huitt and Italian contemporary choreographer Ciro Carcatella, who will be making his first appearance in Asia as part of KEE’s 10th anniversary celebrations.

Trained by legendary choreographer Maurice Béjart, Carcatella now runs ‘Corpus’, his European dance company, and will dance an extract from one of his latest creations.

As the night unfolds and the fun flows, the surprises will continue with Hong Kong-based sensation Russian Roulette, the city’s hottest, high heel-wearing boy band that’s said to possess more kick than a Moscow mule. “Last year’s first Avant G’Art party was a night to remember. It was filled with pulse-pounding disco beats, Gianni Versace-bedecked models, acrobats, contortionists, tango dancers, an opera singer, tarot card readers, provocative pieces of art and enthusiastic attendees. They all found their way into KEE, met head on, and fueled the celebrations into the late night hours.  The crowd was also very generous. Thanks to their goodwill we raised HK$27,500 HKD through ticket sales for the Hong Kong Lesbian and Gay Film Festival and HK$13,000 through the raffle draw for AIDS Concern, our partner charity that night. We’re looking forward to another night of fabulous fun and fundraising this year, and we can’t wait to see you there.” Christian Rhomberg, Founder, KEE Club

Proceeds from both this year’s raffle draw and sales from Cat Street Gallery’s KEE-exhibited art will go to AIDS Concern.
Tickets for the Second Annual Avant-G’Art Party can be purchased at any G.O.D. store or KEE Club – with half of these proceeds going to the Hong Kong Lesbian and Gay Film Festival.