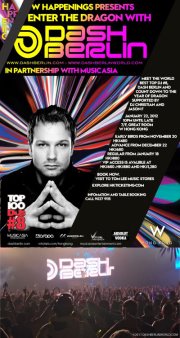 Dash Berlin is the future.
https://www.facebook.com/dashberlinofficial1
One of the best-known DJ on the planet will be Entering the Dragon Year Celebration on the 22nd January 2012... , The main event welcomes Winner an IDMA award renowned Dash Berlin, and is nominated three times at the International Dance Music Awards, Best European Dj's. And Currently ranked # 8 World best. Dash Berlin will kick off the Dragon Year at the setting of the Great Room (W Hong Kong) .

The Enter the Dragon event will Smash the frontier of sound with the presence of renowed international Dj Dash Berlin, backed by a solid rock delegation of Hong Kong Representative that includes Dj Christian and Jason F.

This event will be supercharge with Dazzling lightings, animations, Sound to the perfection. Add that ultra-sexy crowd that comes out for special occasions, and the equation is simple. For anyone who wants to start the Dragon Year with Joy, Fortune & Harmony.

This is a unique opportunity for reserving a place at the best price and above all for making sure you don’t miss the great annual celebration.

BIOGRAPHIE.
Dash Berlin wins an IDMA award for the track 'Waiting and is nominated three times at the International Dance Music Awards, during the WMC in Miami in 2009. His tracks 'Waiting' featuring Australian singer Emma Hewitt and 'Man On The Run', a collaboration with fellow Armada artists Cerf, Mitiska & Jaren are both nominated that year in the category 'Best Trance Track'. In Armin van Buurens popular radio show A State of Trance the 'Waiting' single was elected by the audience to the second best Trance track of the year 2009. The music video is shot in Rotterdam and gains over nine million views on YouTube.

In 2010 Dash is nominated for 'Best European DJ' at the IDMA's and enters the DJ Mag Top 100 poll at number 15. He wins the DJ Mag Top 100 Award for 'Highest New Entry', during the Magazine's ceremony at the Ministry Of Sound in Londen, hosted by Boy George. On October 20, 2011 DJ Magazine announced the results of their annual Top 100 DJ Poll for the very first time in Amsterdam, with Dash Berlin placed at #8 in the world.

The breakthrough for Dash Berlin comes in early 2007 with “Till the Sky Falls Down”. The track shoots straight to the top of the Trance charts worldwide, due in part to Armin van Buuren who included it on the third chapter of his acclaimed “Universal Religion” mix album. Van Buuren subsequently signed Dash Berlin to the Armada Music label.

In early 2009 plans emerge to expand the Dash Berlin influence with his own label called “Aropa.” The first release under the new label is “Man on the Run”, a collaboration with fellow Armada artists Cerf, Mitiska, & Jaren. The track rocketes to the top of the international Trance charts and receives a nomination for ‘Best Trance Track’ at the annual Trance Awards.

October 2009 brings the global release of Dash Berlin’s critically acclaimed debut album, “The New Daylight”, which containes the hits, “Till the Sky Falls Down”, “Man on the Run”, “Waiting” and “Never Cry Again”. A world tour followes beginning in January 2010 in Australia. He deejays all over the world and debuts at big events like 'Trance Energy' in Utrecht, 'A State Of Trance 450' in Bratislava and Dance Valley in Spaarnwoude.

In March 2010 Dash Berlin releases his first official DJ mix, double CD album entitled, “United Destination”. Dash remixes the track and the music video of 'Not Giving Up On Love' by the then number 1 DJ in the world Armin van Buuren, featuring the vocals of Sophie Ellis-Bextor, who is an English singer, songwriter, model and occasional DJ. Another Dash Berlin remix gets delivered for Danish singer Medinafor her track 'You and I' which is an English version of the Danish song, "Kun for mig", released in late 2008 in Denmark, where it spent 52 weeks on the singles chart; six weeks at number one making it the best selling single of 2009 in Denmark.

The follow up to 'United Destination is released in 2011 called; "United Destination 2011" making it an annual concept. UD2011 includes two previously unreleased Dash Berlin tracks; the Dash Berlin 4AM Remix of 'Till The Sky Falls Down' and the single 'Earth Hour', from which Dash Berlin donated the proceeds to WNF. The official Dash Berlin Earth Hour video contains quotes from Hollywood actor Edward Norton and the 'I Am Only A Child' speech by human rights activist Severn Suzuki.

In 2011 Dash Berlin reunites with Emma Hewitt on the track 'Disarm Yourself'. The music video is shot in Australia just weeks before disaster strikes. Dash Berlin and Emma Hewitt donate the proceeds of the single to the Flood Relief Fund in Australia.

He remixes the track 'A&E' by UK indie band 'Morning Parade' for Parlophone Records, the UK label behind artists such as 'The Beatles', 'Coldplay' and 'The Chemical Brothers'.