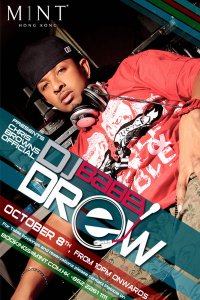 Dj BabyDrew never sleeps. Between traveling the world as the official DJ for the multi-platinum Artist, Chris Brown, working on mixtapes and production projects and deejaying a radio show for 10 years, he is the epitome of the new renaissance man.

True to his New York roots, Queens-bred BabyDrew's boastful personality is backed up by his skills as a true turntablist and entertainer. His ability to rock any crowd - from deejaying for Lil' Wayne on Saturday Night Live to a packed club in Dubai- validates his position as VIBE magazines Top 100 DJ's. On stage he has supported some of the industry's biggest artists such as Kanye West, NAS, Estelle, Ne-Yo. T-Pain, Jadakiss, Gym Class Heroes, Ludacris, Bow Wow, Christina Aguilera, Nickelback, Pitbull, Sean Paul, and more.

Known as Chris Brown’s DJ, Baby Drew no doubt always brings the heat. DJ Baby Drew has drawn inspirations from icons such as Chuck D, Rakim, Easy E, and Scarface. His street representative style, lyrics and intense tone have rocketed him onto a whole new level. Drew can spin for any type of crowd at any place in the world, with an unbelievable intensity.

DJ BabyDrew is an off the hook DJ not to be missed!