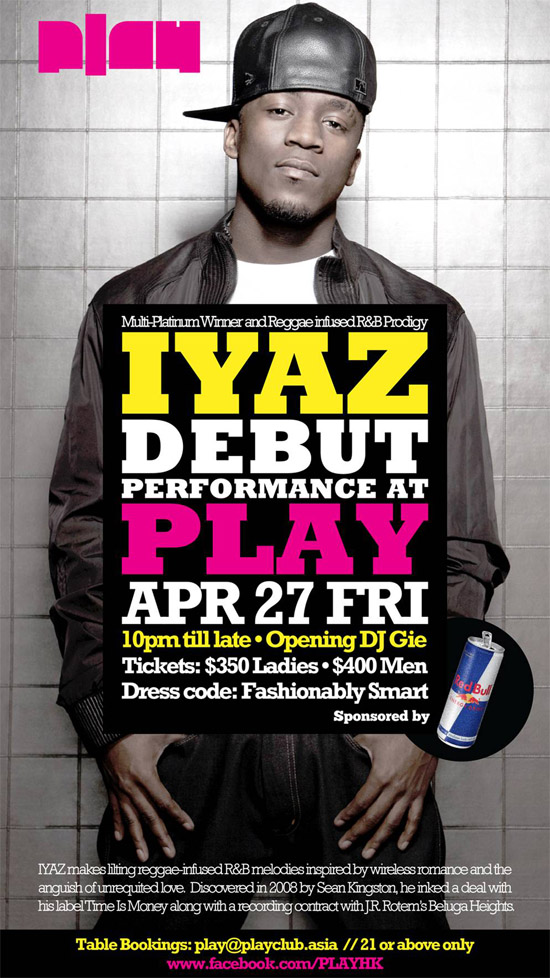 Multi-platinum winner, singer, songwriter and pop artist IYAZ is schedule to debut at PLAY on April 27, Friday at 10pm until late. He makes lilting reggae-infused R&B melodies inspired by wireless romance and the anguish of unrequited love. Discovered in 2008 by Sean Kingston, he inked a deal with his label Time Is Money along with a recording contract with J.R. Rotem’s Beluga Heights. Through the years, it’s evident this 24 year-old prodigy has made a huge name for himself in the music industry.
IYAZ’s international appeal and worldly vocals surely draw comparisons to Akon and Kingston, but the upstart is nevertheless carving his own musical lane. On his latest smash hit “Pretty Girlz,” featuring Travie McCoy, the singer runs down a list of various cities and all the lovely ladies that can be found in their streets over a breezy, infectious melody.
Also known for his debut single “Replay", which reached number two on the US Billboard Hot 100, number one in the UK, Australia and the top ten in many other countries. "Replay," boasts an irresistible melody, crisply syncopated high hats, and a few well-placed electro-violin riffs.

As IYAZ preps his sophomore album, fans can look forward to a few new songs— “Occupation,” “2 Sexy” and “Forget About You”—dropping in the near future.