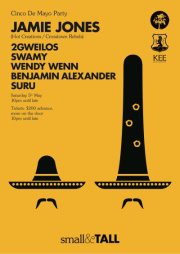 2011 was a monster year for Jamie Jones. He has been described by one journalist as the "the chillest bro in dance music". But we think that "the hardest working guy in dance music" might be a better description:

He put out the hottest tracks - on his Hot Creations imprint, as well as original productions on two of our favourite labels, Crosstown Rebels and Wolf + Lamb.

He put out a highly regarded mix CD for London's Fabric.

And now the reigning king of house music is making his Hong Kong debut at the next Small & Tall. We are returning to KEE Club after April's amazing party where Damian Lazarus helped tear it up with a mind blowing 3 hour set of underground bombs that spanned the entire spectrum of house music.

As it's the 5th of May, we are celebrating Cinco de Mayo festival. So expect some Mexican themed antics on the night. More details later.

Providing support will be Small & Tall residents 2GWEILOS, SWAMY and WENDY WENN. We also welcome back the mighty SURU after he blew the roof off Kee's penthouse floor last month, along with Volar's BENJAMIN ALEXANDER, who killed the after party. Ben will be leaving us for Berlin soon so this will be a fitting swansong!

We have plenty more surprises planned for this party, but that should be enough to be getting on with for now!

Kee told us that the last party was the busiest the club has ever been. Early bird tickets have already sold out. We are keen to avoid the lengthy queuing problems that happened last time. Ticket holders get priority entry as always and it speeds up everyone's entry on the night, get yours here: