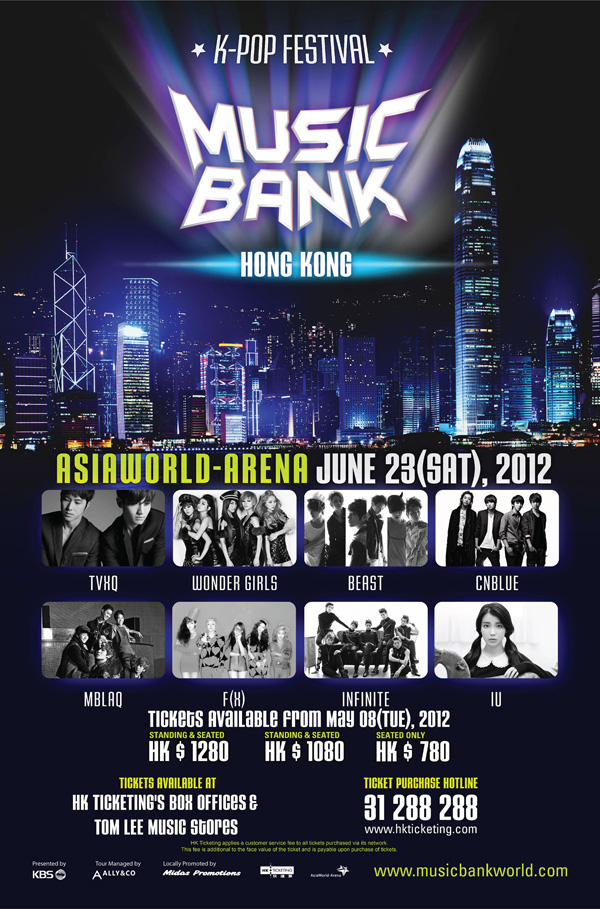 Music Bank, the multi K-pop artists concert from South Korea, will be in Hong Kong for the first time on 23 June 2012 for an exceptional show at AsiaWorld-Arena, following the phenomenal success encountered by K-pop artists such as Girls’ Generation, Super Junior, CnBlue and 2PM in the Hong Kong market recently.

Music Bank is one of the most popular music programmes from Korean Broadcasting System (KBS) in Korea, which is broadcast live through KBS World Channel to 72 countries around the world. This weekly entertainment programme is an opportunity to see top level K-pop artists and is the debut vehicle for upcoming artists. It is the driving force behind the famous Hallyu Wave (or Korean wave) sweeping across and beyond Asian markets, and has a very steady fan base around the world as it remains one of the only shows that satisfies, every week, the fans’ craving for K-Pop.

The Hong Kong show will have the privilege to welcome eight of the most famous Korean artist groups who will set the audience on fire with their powerful choreography and their romantic ballads. The confirmed Artist line-up is TVXQ, Wonder Girls, Beast, CnBlue, F(x), MBlaq, Infinite and IU. Often punctuated by surprises and unique performances, the Music Bank K-Pop Festival is an electrifying, enchanting and top quality show.

Back in July 2011, the first Music Bank World Tour took place in Tokyo Japan with a sold-out show at Tokyo Dome. In February 2012, the second show was hugely successful in Paris, France with dynamic performances from top level K-pop artists and an extravagant production. Music Bank in Hong Kong is the newest and the first stop in Asian market ever.

K-pop fans should not miss this one-night only show. Presented by Korean Broadcasting System and promoted in Hong Kong by Midas Promotions, Music Bank Live in Hong Kong 2012 will storm the stage of AsiaWorld-Arena on 23 June 2012. Tickets to the show are on sale through HK Ticketing and Tom Lee Music Stores (www.hkticketing.com; tel: 31 288 288) from 8 May 2012.

(Information provided by the pr company)