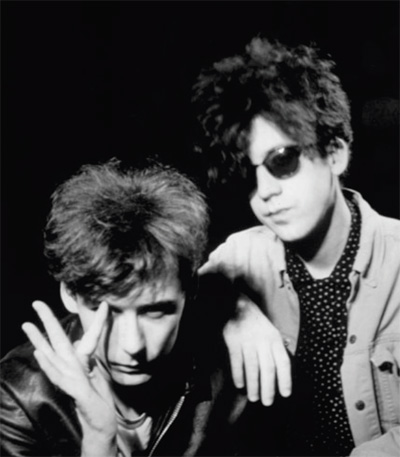 
The Jesus and Mary Chain

One the most influential Scottish iconic rock and roll bands of all time and one of the most legendary bands in the world.
Like the Velvet Underground, their most obvious influence, the chart success of the Jesus and Mary Chain was virtually nonexistent, but their artistic impact was incalculable; quite simply, the British group made the world safe for white noise, orchestrating a sound dense in squalling feedback which served as an inspiration to a continuing host of bands - My Bloody Valentine  to Dinosaur Jr., Spiritualised, The Horrors.

Tthe heart of the Mary Chain is the Scottish brothers William and Jim Reid, heavily influenced not only by underground legends like the Velvets and the Stooges but also by the sonic grandeur and pop savvy of Phil Spector, The Shangri-las and Brian Wilson. In the Jesus and Mary Chain,  these two polarized aesthetics converged; equal parts bubblegum and formless guitar distortion, their sound both celebrated pop conventions and thoroughly subverted them. Original members Bobby Gillespie went on to form Primal Scream and Douglas Hart a succesful film director (also directing The Horrors pomo videos)

In 1984, the band issued its seminal debut single, "Upside Down," a remarkable blast of live wire feedback anchored by a caveman-like drumbeat; the record made the Mary Chain an overnight sensation, as did their nascent live shows, 20-minute sets of confrontational noise (performed with the band's members' backs to the audience) which frequently ended in rioting. Their 1985 debut LP Psychocandy, which gift-wrapped sweet, simple pop songs in ribbons of droning guitar fuzz.

The Mary Chain re-defined cool, an element of danger and enough attitude for ......Their early shows became stuff  of myth and legend, indie fashion as we know it today was born; skinny black jeans, leather, stripey t-shirts, plaid shirts, fringes were to become the main stay of indie fashion for generations that followed.

The band returned briefly in 2007 performing at Coachella with Scarlet Johansson appearing on stage for ‘Just Like Honey’ after the track was used  in ‘Lost in Translation. Their music and aesthetic has prevailed making them one of the most iconic bands in the world and this may be a once in a lifetime chance to see them in Hong Kong.
The line up for the Hong show includes John Moore (Jesus and Mary Chain and Blackbox Recorder), Brian Young (The Posies, Fountains of Wayne,) and Phil King (Lush)