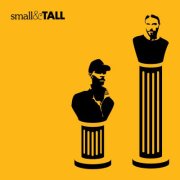 & IN A CHANGE TO THE ADVERTISED SCHEDULE...

We are truly sorry to have to say that Art Department have been forced to postpone their gig due to illness. Something to do with a punishing early summer tour schedule lately and perhaps a very long Monday at DC10 in Ibiza... They send you all their deepest apologies and we are working with them to reschedule the gig for later in the year, we promise.

It's disappointing but this was totally beyond our control. Now the show must go on!

The last thing we wanted to do is let you all down, so this morning DJ agents from all corners of the world were scrambled, with the challenging brief of finding a worthy replacement to play at this Saturday's Small & Tall.

And at the 11th hour, we find ourselves actually very excited to announce that not one but two rising stars of the scene will be making their debut in this fine city, sent on the double via express delivery all the way from London:

Jozif's name has been gaining increasing attention from the who’s who of the underground electronic music community lately. The London born and bred artist has been charming the pants off the UK and Europe with his productions and DJ sets alike in recent years.

With an infectious and underlying groove to his rhythms - Jozif has a unique presence in and out of the booth, encapsulating his floor and coaxing them alongside his ever changing musical explorations. Craig Richards, Ben Watt, Matt Tolfrey, Andrew Weatherall and Ashley Beedle alongside London’s fabric, lo*kee and Ibiza’s We Love...Space have all fallen for his quirky and impossible to pigeonhole beats. Loose and lazy drum patterns, dramatic strings and brass tinged with slo-mo ambience and a rolling undercurrent of funk depict a soundtrack all of his own that resonates with our musical heart strings whilst evoking the dirty bump and grit of a twisted 6am dance floor.

With upcoming remixes and releases on My Favourite Robot, Compost, No.19, Future Classic, Mobilee and Fist or Finger, the future is looking bright for Jozif. Here is a fine example of his work that we have had on heavy rotation all year:

The London based DJ, Vocal Techniques graduate and accomplished pianist first surfaced under the Jackie Misfit guise. With this alias, she DJed at various underground parties plus clubs like Brixton Academy and The Drom in the English capital,... but also released on labels like Lokomotiv Recordings and started her own imprint, Echolette Records. It was a quick success story, with remixes from the likes of Hector picking up keen support from tastemakers including Marco Carola, Radio Slave and Loco Dice.

Now, though this unique electronic sculptress is working under her given name, Francesca Lombardo.So far she has spun alongside titans like Sven Vath, Agoria and Tobi Neumann at places like Klubbers Festival, Madrid, and Danzoo for Space of Sound, always joining the dots between house and techno.

Production wise for this genuinely musical talent it’s all about feeling, and it has been since growing up around her father’s vast collection of instruments as a child. “My style is colourful,” she says. “I like to write a track depending on how I feel. My tracks usually follow a concept.”

Said music is inspired by a lifetime of listening to Depeche Mode, Aphex Twin, Plastikman and more recent sounds like those offered by Ghostly International and Traum. But also by playing piano at Conservatorium of Music for Classical piano and singing opera from a young age. “Despite this, I was always attracted to electronic music and machines” she remembers. “I could never really cope with classical.”

With all these skills and musical experiences available to draw on, the future looks bright for Francesca Lombardo - an upcoming EP on leading contemporary label, Crosstown Rebels is only testament to that, as is the fact she has been signed to the much lauded Rebel Agency - alongside Art Department.

Damian Lazarus recently launched Francesca into the spotlight with her debut mix for Crosstown Rebels, that consists largely of her own productions:

As ever, Small & Tall residents 2GWEILOS, SWAMY, and our newest resident SURU will also be playing. It's Paul 2Gweilos' birthday too. Supporting Suru upstairs this month will be our good young friend Carl Cousin, who has been making quite a name for himself around town lately.

TICKETS
For those of you that have bought tickets already, they will still be valid - not only for this week's party but for the next one when Art Department do come to play for us. For those who haven't bought them yet, tickets are still on sale for tomorrow (it will be more on the door).

Once again we are truly sorry about Art Department but we are confident that with Jozif and Francesca on board the party is going to go off anyway. Let's make it one to remember!