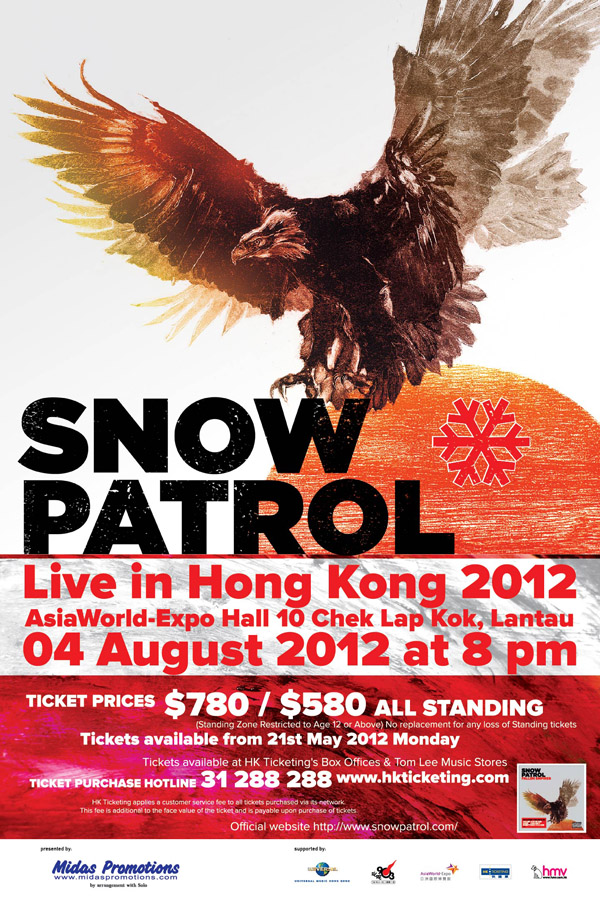 Snow Patrol, one of the biggest selling UK band, is set to rock the stage of AsiaWorld-Expo with its one night only gig Snow Patrol Live in Hong Kong 2012 on 4 August 2012.

The part Irish, part Scottish band has come a long way since their first album Songs for Polar Bear in 1998. They have transformed from a cultish indie band into a stadium-packing tour de force having sold over 11 million albums worldwide featuring for era-defining singles including Run, Chocolate and Chasing Cars. Snow Patrol has been nominated for the Mercury Music Prize, Grammys and MTV Europe Music Awards, and won an Ivor Novello Award in 2005 with the album Final Straw.

Fans should seize their chance to be part of Snow Patrol’s one night only live gig. Brought to you by Midas Promotions, Snow Patrol Live in Hong Kong 2012 is held on 4 August 2012 at AsiaWorld-Expo. Tickets to the show are on sale through HK Ticketing and Tom Lee Music Stores (www.hkticketing.com; tel: 31 288 288) from 21 May.

Snow Patrol Live in Hong Kong 2012
Date:     Saturday, 4 August 2012
Time:     8pm
Venue:     AsiaWorld-Expo Hall 10
Tickets:    HK$780 / HK$580 all standing
(Standing Zone Restricted to Age 12 or Above)
No replacement for any loss of Standing tickets
Available from 21 May 2012 through HK Ticketing and Tom Lee Music Stores
Ticketing hotline:    31 288 288
On-line ticketing:    www.hkticketing.com
HK Ticketing applies a customer service fee to all tickets purchased via its network. This fee is additional to the face value of the ticket and is payable upon purchase of tickets.
Snow Patrol official website: http://www.snowpatrol.com/