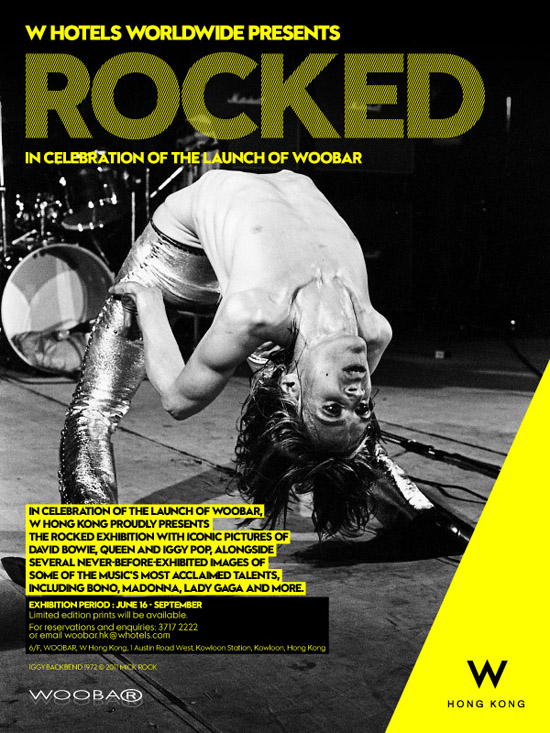 Gathering all trendsetters in town, W Hong Kong is going to launch WOO BAR on June 15, 2012. As an avid supporter for     music and fashion, W Hotels is providing all hotshots a place to know what’s new and next in Hong Kong through Woo Bar.

To welcome the latest hotspot in town, W Hotels Worldwide is bringing the rock wave from W New York – Downtown to W Hong Kong with the ROCKED exhibition. From June 16 to September, unleash the rocker spirit as Woo Bar transforms into a rocking art gallery featuring Rock master pieces of celebrities taken by legendary music photographer, Mick Rock. To help guests get into “rocker mode” in no time, a custom-made vinyl entrance with eye-catching Rock images and Bubble Lifts covered in blazing Rock imagery will be set up. The Bar’s signature butterfly wall will feature bold images of celebrities, including David Bowie, Iggy Pop and Debbie Harry, and some never-before-seen images from Lady Gaga, Bono and more.

On June 15th, the rock mastermind, Mick Rock, will be present at the opening event of Woo Bar to unveil his inspiration behind the exhibition. W Hotels DJ Lab 2011 artist, Lincoln Medley, and a Beijing rock band will also be performing live to capture the spirit.

For all rock lovers and aspirers, ROCKED at WOO BAR is certainly an exhibition that cannot be missed!

An iconic signature bar to see and to be seen, WOO BAR invites all trendsetters to be in the loop of what’s new and next in Hong Kong. With exciting events occurring constantly, an advanced DJ Program that produces different music tunes daily, and a unique cocktail culture presenting the highest quality of wine and cocktail selection, get ready for a nonstop entertainment spree in the vibrant and energetic setting of WOO BAR.

ABOUT MICK
ROCK:     Often referred to as “The Man Who Shot the Seventies”, Mick Rock is a British photographer best known for his iconic shots of music legends such as David Bowie, Madonna, Queen, The Sex Pistols, Debbie Harry, Iggy Pop, Snoop Dogg, Alicia Keys, Daft Punk, and many more.

LAUNCH EVENT:
June 15
9pm until late (by invitation only)

** The exhibit is free for all paying guests at WOO BAR. Limited edition prints will be available. **

MICK ROCK :
Dubbed as “the man who shot the 70s”, Mick Rock helped create rock ‘n’ roll. He caught the finest artistic and personal moments of musicians in photo form that include Lady Gaga, Alicia Keys, Snoop Dogs, Queen, Iggy Pop, Joan Jett, the Yeah Yeah Yeahs, the Chemical Brothers and many more. He started his career as the official photographer of David Bowie in 1972. Despite being a rookie, the shots he took shock the entire industry and remained forever as rock icons. Rock’s unparallel talents in capturing the soul and essence of an artist and his overwhelming passion for unconventionality made him the most-sought-after photographer in the world.

Apart from photography, his 3 mega-scale exhibitions are also highly successful. The 2003 retrospective exhibition held at the Tokyo Metropolitan Museum of Photography that included 186 prints from  1980’s, 1990’s to the new millennium, was praised as “one of the finest collections of pop art to ever reach these shores” by the local press.  His second 150-print exhibition at Manchester, England’s Urbis Cultural Centre, which ran from Sept 2005 to Jan 2006, gained explosive popularity. The London Times named Rock as “the music world’s top snapper”. His third exhibition in 2009, “Rock n Roll Kate”, a collaboration with supermodel Kate Moss, was commended by Dutch press as “hot, sexy, totally rock n roll, and probably truer to the real spirit of the Divine Ms Moss than any other photos ever taken of her”.