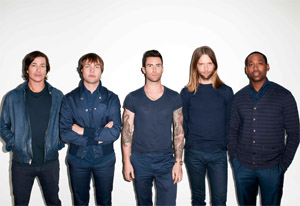 Capturing their first of three Grammy Awards as “Best New Artist” of 2005 and going on to sell more than 17 million albums worldwide, Maroon 5’s releases have gone gold and platinum in over 35 countries. Maroon 5 won over fans and critics alike with the hybrid rock/R&B sound they introduced on their debut album, Songs About Jane and their double platinum album, It Won't be Soon Before Long, which included hits like "Makes Me Wonder" and "If I Never See your Face Again."

In September 2010, the band released their third studio album, Hands All Over, which also recently went platinum. The collection featured two hit singles including the Hot AC smash “Misery” and the anthemic “Moves Like Jagger,” which climbed to the #1 spot on the Top 40 and Hot AC charts and also claimed the #1 spot on the Billboard Hot 100. Both singles received GRAMMY Award nominations in the category of "Best Pop Performance By A Duo Or Group With Vocals," marking the group’s eighth GRAMMY nomination overall and 5th in that category. With the success of “Moves Like Jagger” on the Hot 100 chart, Maroon 5 frontman Adam Levine became the first artist in the chart's 53-year history to reach #1 as part of a group and enter the Top 10 at the same time as a soloist, as he is also featured on Gym Class Heroes’ “Stereo Hearts."

In addition to his work with Maroon 5, band frontman Adam Levine joined the #1 NBC hit series The Voice as a coach in 2011. The show dominated ratings in 2011 and 2012.

The first single off the new album Overexposed, “Payphone” featuring Wiz Khalifa is already a huge hit. The song shot into the Billboard Hot 100 at No. 3. Maroon 5 frontman Adam Levine said of the new album being released in Hong Kong on June 25, “Overexposed is definitely one of our most diverse and poppiest albums yet. We had a great time recording it. I can’t wait for our fans to hear the record, as well as hitting the road to play it live for everyone later this year.” Producers on the album include Max Martin, Benny Blanco and Ryan Tedder.


Maroon 5 began writing and recording the album during their most recent world tour and the resulting collection is chock-full of undeniable, anthemic melodies. The album includes such stand out tracks as the emphatic “Payphone” featuring Wiz Khalifa, the irresistible “One More Night” and the rhythmic ballad“Beautiful Goodbye.”
Fans in Hong Kong are in for one of the hottest live shows this year as Maroon 5 performs live at the AsiaWorld-Arena on 27th September.