An Evening with Joe Bonamassa Live in Hong Kong 2012 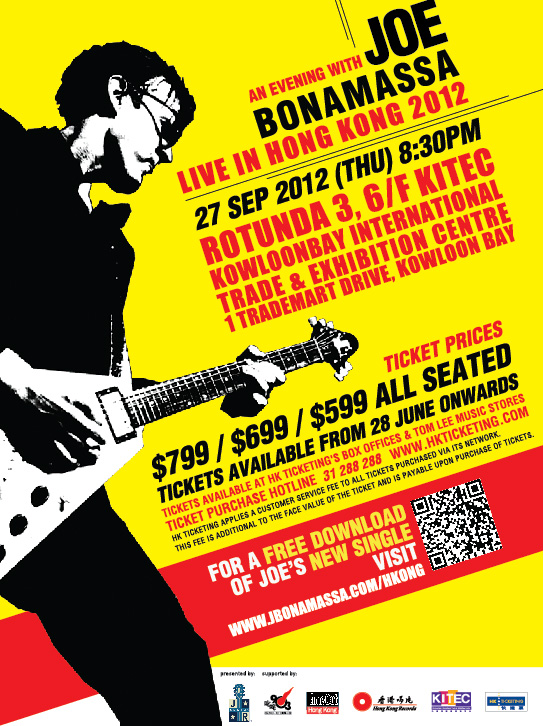 An Evening with Joe Bonamassa Live in Hong Kong 2012

Born and raised in New York, Joe Bonamassa began his music career in the early 90s with Bloodline, a hard-charging rock-blues group. His 2000 solo debut A New Day Yesterday won praises from critics. His rendering of the title track was “a jaw-dropping performance” according to allmusic.com.

Since then Bonamassa has been steadily building his career and in 2010 released his ninth studio album Dust Bowl. It combines the gritty, blues-based tones with the fluid, genre-defying sounds. In addition to the songs penned by Bonamassa, the album features songs written by fellow musicians John Hiatt, John Porter, Vince Gill and Pete Wasner.

Joe Bonamassa’s talents are well-recognized by fans and critics. In 2010, he was named Billboard’s #1 Blues Artists with the success of Black Rock, the #2 Billboard Blues Album of 2010. He was also called “The Blues Rock Titan” by Guitar World and was honoured twice in Guitar Player Magazine’s 2010 Reader’s Choice Awards winning “Best Overall Guitarist” for the first time and “Best Blues Guitarist” for the fourth consecutive year.

Get your tickets now for a night of blues-rock with guitar maverick Joe Bonamassa! Brought to you by J&R Adventures, An Evening with Joe Bonamassa Live in Hong Kong 2012 will be held on 27 September 2012 at KITEC. Tickets are on sale through HK Ticketing and Tom Lee Music Stores (www.hkticketing.com; tel: 31 288 288) from 28 June 2012.

Ticketing hotline:    31 288 288
On-line ticketing:    www.hkticketing.com
HK Ticketing applies a customer service fee to all tickets purchased via its network. This fee is additional to the face value of the ticket and is payable upon purchase of tickets.
Joe Bonamassa official website: http://jbonamassa.com/