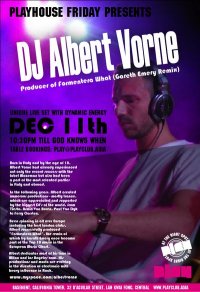 PLAYtime: 10:30pm till God Knows When


Born in Italy and by the age of 18, Albert Vorne had already experienced not only the record success with the label Mazeman but also had been a part of the most selected parties in Italy and abroad.

In the following years, Albert created numerous productions - mostly trance,which are appreciated and supported by the biggest DJ's of the world, from Tiesto, Armin Van Buren, Paul Van Dyk to Ferry Corsten.

Been spinning in all over Europe including the best London clubs, Albert successfully produced "Formentera What", the remix of which by Gareth Emery once became part of the Top 10 music in the European Music Chart.

Albert dedicates most of his time in Milan and Los Angeles now. His productions and music are evolving in the direction of electronic with heavy influence in Rock.