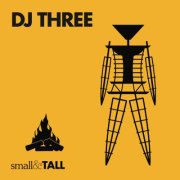 August is upon us and the time of year is fast approaching when many of Hong Kong's party crowd are making preparations to descend upon the Nevada desert on their annual pilgrimage to the Burning Man festival. (or as Swamy refers to this, 'going home'!)

Small & Tall are sending out a contingent - Swamy is music director of the legendary Robot Heart Bus (which was featured in last month's Rolling Stone magazine as THE place to party at Burning Man). He will be going out there along with 2Gweilos and Benjamin Alexander. Expect a full report later...

Meanwhile, for those who prefer partying in the champagne-fuelled surroundings of KEE to the middle of a desert, we're bringing a small taste of Burning Man to you on August 11th:

DJ Three will be flying out from New York City to headline August's Small & Tall party before heading to the desert to play the Robot Heart bus later this month.

Here's some essential info about Three:

NYC resident DJ Three emerged from Florida in the early 90's with a style that today is still rooted in this era, fusing acid house with deeper and more forward looking house and techno.

Three runs the influential record label Hallucination Limited and has been a resident at the legendary Cielo in New York and was recently named by Visionquest's Lee Curtiss as his favourite DJ. A true enthusiast and connoisseur, Three has the breadth of tracks, knowledge and instincts to know what to play (and when to play it), giving him the rare ability to - as Lee says - "turn any room into his party".

Come and see for yourself at KEE on Saturday August 11th..

You can order tickets via Eventbrite:
http://smallandtalldjthree-efbevent.eventbrite.com/