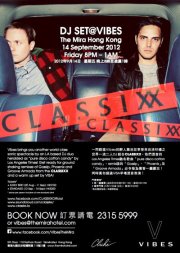 The underground and indie musical scene in Hong Kong has made a lot of progress lately (College, Justin Faust, Moullinex,...)

This year the Mira's Vibes and Cliché Records brought you Jupiter and The Magician,

And now we continue with CLASSIXX !!!


Playlisted by the biggest such as Tennsnake, Aeroplane, The Magician, Treasure Fingers, Todd Terje or Flight Facilities, they have also collaborated with the biggest producer out there (Jeppe).

Classixx is composed of Tyler Blake and Michael David, childhood friends,. They started a DJ duo in the suburbs of Los Angeles. Their smooth blend of disco, new wave, funk, house, and indie rock caught the ears of music aficionados, fans and artists alike

So bring all your friends along and come to Vibes, the coolest out-door bar in Hong kong for the most important night of september.

The party will start at 8pm and will be opened by VISA.

send a mail at :
info@cliche-records.com

* per person inclusive of one standard drink


See you at Vibes on Friday September 14th!