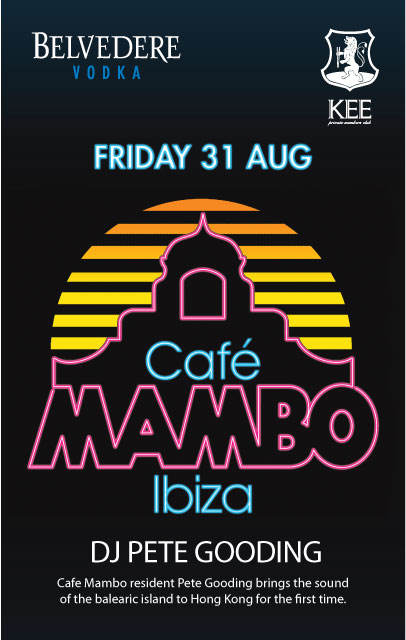 Pete Gooding, who famously played marathon 8 hour sets everyday over his 10 year summer residency and who's responsible for almost every Mambo compilation since they first started producing them will bring his perception of Cafe Mambo to Kee Club for the first time. He'll be playing his blend of deep, sexy house which will reflect his legendary after-sunset vibe long into the night.

The iconic Cafe Mambo sits in the centre of what has become known as the sunset strip in Ibiza. The legendary venue has been
at the forefront of the electronic music scene in Ibiza since it opened 18 years ago with international DJs such as Pete Tong, Sasha, Roger Sanchez, Paul Oakenfold and Frankie Knuckles playing there on a daily basis, not to mention live appearances by Groove Armada, Faithless, Jaimie Cullem and Brand New Heavies (to name a few).

In 2007 Cafe Mambo was honoured for the second time with the prestigious DJ Award for the best Bar in Ibiza. This was international recognition for the marked contribution Cafe Mambo has made to the island, changing the way people perceive the island within the music industry and generally making a tangible difference to the way bars and restaurants think in Ibiza.

Ticket on sale at -
http://cafemambo-keeclub.eventbrite.com/

$300 at door, includes one standard drink. Free for members