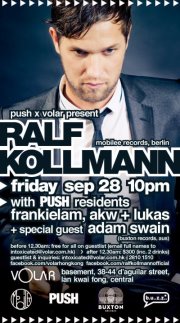 Ralf Kollmann is Mobilee Records’ secret weapon; the quintessential double-threat who has taken the Berlin label to lofty heights, as well as a man who has dominated dancefloors worldwide with his renowned DJ skills.

Ralf formed Mobilee in partnership with Anja Schneider, and what began as a side project quickly expanded into a fully-fledged career as Mobilee blossomed from a small, homegrown label into a full-on music and entertainment enterprise.

Kollmann earned his stripes within the mid-1990s techno
communities of Cologne and Frankfurt, before moving to Berlin in 2002. Since then he has become a central figure in the development of the capital’s musical identity.

Under Kollmann’s guidance, and with his discerning ear, Mobilee records and offshoot label Leena have risen through the ranks since 2005 to become one of the brightest stars in Berlin’s glittering galaxy of electronic music labels, with a roster of artists that also includes Pan-Pot, Rodriguez Jnr, Anja Schneider, Maya Jane Coles and Vincenzo, who helped launch PUSH’s Berlin series this July.

Ralf is a lifelong DJ and the lynchpin of Mobilee’s excursions beyond its Berlin base, with appearances throughout Europe, North America and South Africa, and at the helm of extensive international tours, label showcases, and special events at Sonar and WMC.

Equally adept at packing dancefloors as he is at predicting tomorrow’s underground hit, Ralf works tirelessly behind the scenes to hone the Mobilee sound, championing the label’s artists and unearthing the future-forward new talent that will contribute to pushing the Mobilee vision forward.

Throughout five years of Mobilee’s history, one thing has become clear: whether he is running a label or commanding a club, Ralf hits all the right spots; he continues to be an integral part of Mobilee, behind the vision, passion, and love of music that drives the label’s extended team in all that they do, and all that will come.

Ralf continues to push Mobilee and its ever-growing collective in a dynamic direction – and this direction is now bringing him to Hong Kong for a headlining apperance at PUSH, where he will be supported by residents Frankielam, Lukas and AKW.

PLUS we are super psyched to be welcoming back the mighty ADAM SWAIN (Buxton Records, Australia) as our special guest for the night. This master of deep house from Down Under has become one of the most popular repeat visitors to Hong Kong in recent years, and has blown us all away with his epic sets of deep, dirty grooves.