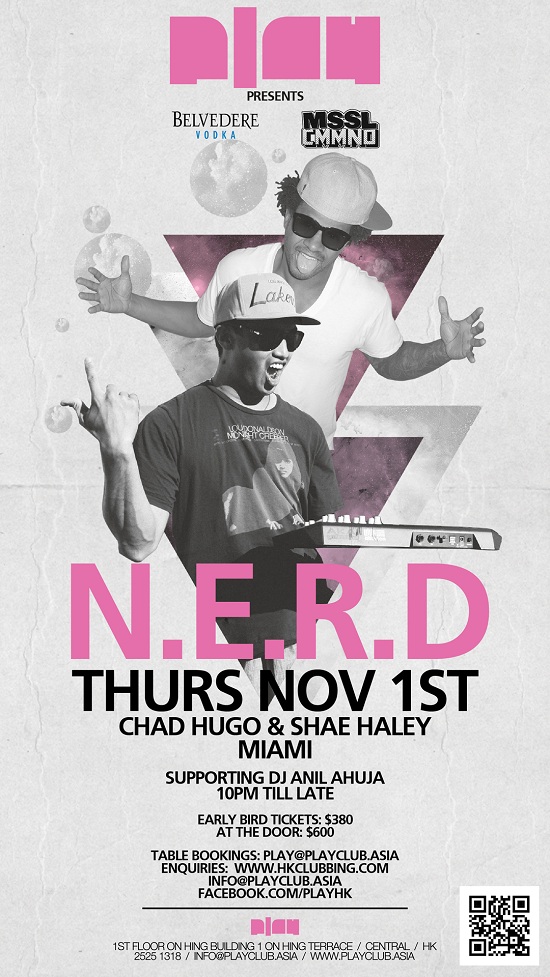 THOSE THAT HAVE PURCHASED AN EARLY BIRD E-TICKET ONLINE, PLEASE BRING YOUR CONFIRMATION SLIP AND SOME FORM OF IDENTIFICATION TO THE DOOR OF PLAY ON THE NIGHT TO ATTEND THE EVENT.

N.E.R.D. (DJ Set) is hitting the party scene once again and heading straight for one of Hong Kong’s most talked about club! Renowned for influencing the scene with their American rock, funk, and hip hop tracks. Chad Hugo and Shae Haley of N.E.R.D. will be hitting the decks at PLAY on October 25, Thursday!

Their crew began when Pharrell Williams, Chad Hugo and Shay Haley formed a concept band in their hometown of Virginia Beach, and still stands ten years later as a group of musicians who have worked consistently to mold and conquer a new space in the musical world, creating N.E.R.D. as a side project of The Neptunes in 2001.

Under the Neptunes production label, Williams and Hugo changed the sound of pop music with their cultivated minimalism, producing a limitless number of hits for artists like Jay-Z, Justin Timberlake, Britney Spears, Snoop Dogg, The Clipse, Gwen Stefani and more.

As one-third of N.E.R.D, Hugo would trek the globe and influence a generation of listeners with the band’s distinguished combination of rock, soul, and hip-hop. Now, Hugo is working with Baltimore-based DJ Daniel Biltmore to help push his signature sound into the stratosphere with their MSSL CMMND project.

Prepared with original productions and never-before heard classic takes, Chad Hugo and Shae Haley of N.E.R.D. is ready to thrill and excite the PLAY domain!