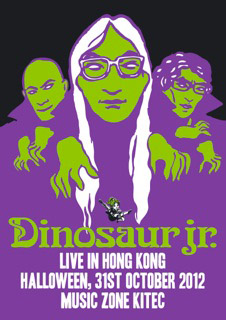 Event Title:         Songs For Children present Dinosaur JR Live in Hong Kong
Event Date:          31 October   2012
Event Venue: Music Zone, KITEC, 1 Trademart Drive, Kowloon Bay, Hong Kong
Event Time:         Doors open at 8.00 PM
Tickets:          430 HKD (early bird while stocks last)  480 HKD advance, 495 HKD on the door.  On sale Friday 21st September from:
White Noise Records, Room 1901, 19/F, Workingview Commercial Building, 21 Yiu Wa Street, Causeway Bay,
Zoo Records, 3/F. Sai Yeung Choi St South, Prince Edward
The Globe, 45 Graham Street, Soho
Online tickets available from www.cityline.com.hk  from Sept 26th.
CitylineTicketing Vendors, Tom Lee outlets, HKAPA
To arrange an interview, high res pics contact: Janeblondel@me.com, Tel: 9709 2085
Dinosaur JR, Bio
‘Mascis wields an idiosyncratic, always mesmeric approach that's rendered him a pot-punk pioneer, a guitar titan who's bridged the gaps between Neil Young and Prince and Minor Threat without so much as raising his voice.‘   ROLLING STONE
Dinosaur Jr. are one of the most significant American rock bands of all time; the sound they pioneered in the late-80s laid the groundwork for many breakthrough alt-rock acts of the Nineties — from Nirvana on down. It’s hard to imagine the existence of, grunge, indie rock, noise pop, fuzz rock whatever you want to label it without the existence of the legendary Dinosaur Jr.
It wasn't just their signature metallic haze that made an impression; their effects laden guitars were wrapped around honey rich melodies with  some of the best songwriting of the decade. The first three albums -- Dinosaur, You're Living All Over Me and Bug -- were cult masterpieces. As Lou Barlow put it  "We loved speed metal and we loved wimpy-jangly stuff" . The band drew influences from the Beach Boys to Black Sabbath to The Birthday Party.
The inscrutible J Mascis was the original slacker kid,  he insisted on cranking his guitar to such high volumes because the instrument itself was so "wimpy."  (He also spent many moments deep in liquefying solo, thinking of "dinner."). His status as a cult icon was cemented when Thurston Moore of Sonic Youth  stated that their  indie anthem ‘Teenage Riot’ was about a fantasy where J Mascis was president.
The band went through line up changes with Lou Barlow departing to form the hugely influential ‘Sebadoh’ J. Mascis worked with many others from Kevin Shields (My Bloody Valentine) to Ron Asheton (The Stooges) and Mike Watt ( Minutemen) and formed the metal band ‘Witches’. However it was only when the holy trinity of Mascis, Barlow and Murph re-formed in 2005 the orginal genius was back.  ‘Beyond’ followed by ‘The Farm’ showed the band had not lost any of their vitlality with critics claiming they were even better and MTV
proclaiming the comeback ‘ the unique energy of one of America's greatest living rock bands hitting their stride. ‘ J Mascis was named No. 5 in SPIN magazine’s top guitarists of all time and joined the ranks of guitar heroes when Fender created the signature J Mascis Fender.
Dinosaur Jr released ‘ I Bet on Sky’  September 2012 on Jagjaguar making new ears bleed afresh and receiving huge critical acclaim (NME = 8/10,

Songs for Children could not be more delighted to bring the original line up to Hong Kong  for the first time for the best Halloween ever!