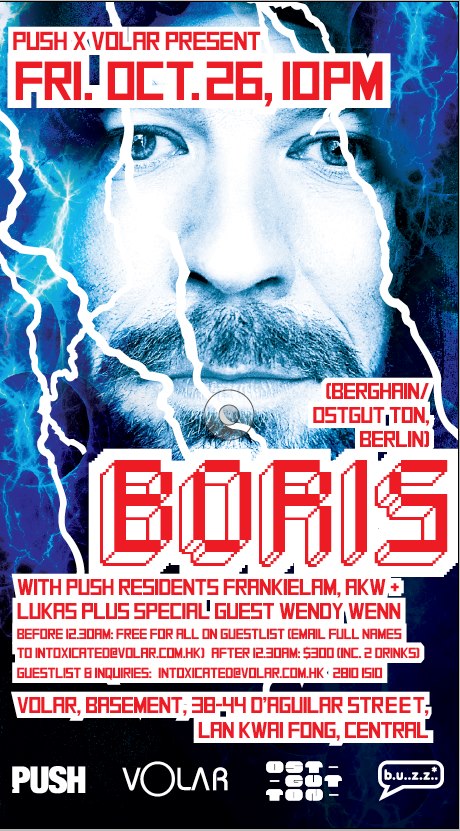 Berghain in Berlin is widely considered the best club in the world – and Hong Kong electronic music followers can find out what it sounds like when the PUSH crew brings Berghain resident BORIS to Volar on October 26.

Boris has been described as the beating heart of Berghain, where he plays marathon sets that flawlessly cross between genres and boundaries, with everything from deep German techno and Krautrock to disco, Hi-NRG, post-punk and house being thrown into the mix.

Boris’ musical roots stretch ba
ck to the mid-80s when he lived in New York for four years and absorbed the unique spirit of the seminal club Paradise Garage. From the club’s mentor, Larry Levan, Boris learned to believe in his musical intuition as well as appreciate sounds from a very broad spectrum. “Music was most important for Levan. He was uncompromising and he knew how to convey this. That’s what I’m trying to achieve too when I’m DJing,” Boris says.

Many years later, Boris became a resident at Panorama Bar’s first incarnation in Berlin, where he built up a loyal following playing long sets lasting until noon. “The crowd is always a lot more receptive to music at the end rather than the beginning. That’s when I’d rather have an opportunity to present unusual stuff and that’s when I’m able to let my feelings run freely.”

After the old Panorama Bar closed, Boris played in almost every club in Berlin, but when the follow-up club Berghain opened its doors in 2004, Boris was quickly enlisted as a resident. In the years since, Boris has also had several releases on Ostgut Ton – the label owned by Berghain – as well as overseen the running of the label Careless Records as an A&R.

Both as a DJ and as an A&R, Boris is not out to refine any one genre, but to push music with a certain twist. Boris’ most recent sets have seen him focus on the stripped-back, percussive techno that Berghain is known for.

PUSH are super-psyched to be bringing a night of solid Berghain-style techno to Volar, where Boris will be supported by the ever-popular WENDY WENN and the PUSH crew Frankielam, Lukas and AKW.

Earplugs will not be provided.