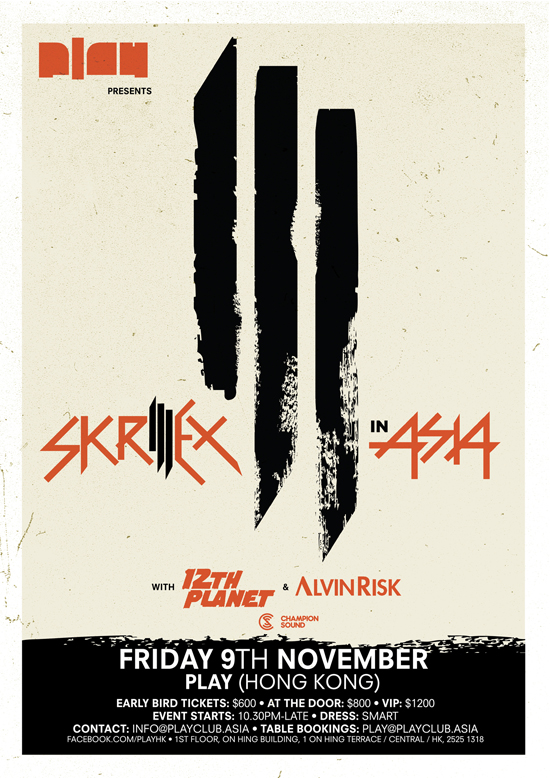 THOSE THAT HAVE PURCHASED AN EARLY BIRD E-TICKET ONLINE, PLEASE BRING YOUR CONFIRMATION SLIP AND SOME FORM OF IDENTIFICATION TO THE DOOR OF PLAY ON THE NIGHT TO ATTEND THE EVENT.

Get ready Hong Kong! Three time Grammy Award winner, SKRILLEX (aka Sonny Moore), is coming to Hong Kong for the first time and is bringing along dubstep/drum & bass music wizard, 12th Planet and DJ Alvin Risk, one of the best EDM DJ’s from the US. They will be dropping the bass at PLAY club November 9, Friday from 10.30pm till late. Door tickets will be priced at $800 and $1200 for VIP access while early bird fans can get the chance to purchase at only $600.

Skrillex is an electronic DJ and producer who boasts a musical style that contains electro house fidget house and unique dubstep skills that will keep you on your toes. In 2010, his alias "Skrillex" became larger part of Moore's life on 7 June 2010 as he released his debut EP "My Name Is Skrillex" as a free download. Gaining recognition, shortly after he contracted with mau5trap, he began a nationwide tour with Deadmau5 on October 22, 2010 and released his second EP "Scary Monsters and Nice Sprites" as a collaboration with mau5trap. Both have since become moderate commercial successes.

If topping the club charts didn't prove his place in the music scene, a 2011 appearance on the revived Beavis & Butthead television solidified that and proved he was climbing the top, along with his collaboration with the surviving members of the Doors called "Breakin' a Sweat." Don't miss out on this mind blowing performance only at PLAY on November 9, Friday!