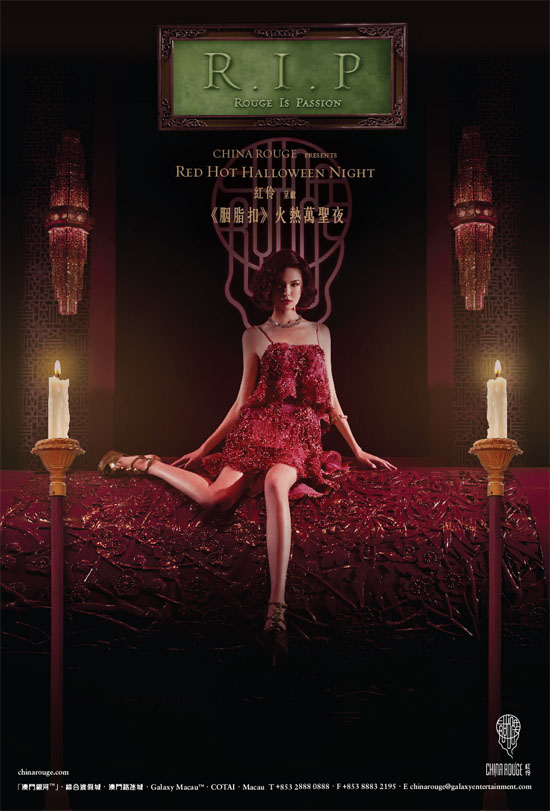 Halloween this year at CHINA ROUGE will be a glamorous and ghostly affair inspired by the iconic film Rouge.  On October 31, the spirits of Fleur and 12th Young Master will walk again through Galaxy Macau™’s forbidden chamber to recreate the hedonistic heyday of Shanghai’s past in southern China’s most luxurious private members-only performance lounge.

In the film Rouge, the characters played by Leslie Cheung and Anita Mui - fashionable playboy 12th Young Master and Fleur the beautiful high-class courtesan - meet in an opium den to start a doomed romance that ends in a failed suicide pact. Fifty years later the ghost of Fleur returns to the modern day to seek out her lost love.

From the moment guests cross the eerie reception area into the lush and louche environs of the CHINA ROUGE lobby they will experience the decadence of 1930s Shanghai but with a slightly sinister edge. Character models cast sideways glances and provocative stares.

In the beautifully decorated showroom, the entertainment kicks-off with a supernatural Halloween adaptation of the Shanghai Rose cabaret to keep guests on the edge of their seats. The ‘East meets West’ show program continues with a new medley of old Shanghai tunes from house band Red Moon, followed by the “Charleston” scene and “Lady Rose” starring violinist Venus. Characters from different acts will re-appear on stage with a series of ghostly classics pop to give a finale of non-stop medley of Halloween-inspired hits video.

Doors open at 10:00pm on Wednesday 31 October, and the show program begin at 10:15pm. Standing tickets are available in advance for MOP620 per person and entitle guests to a wide range of free-flowing drinks all night, including Moët & Chandon champagne.