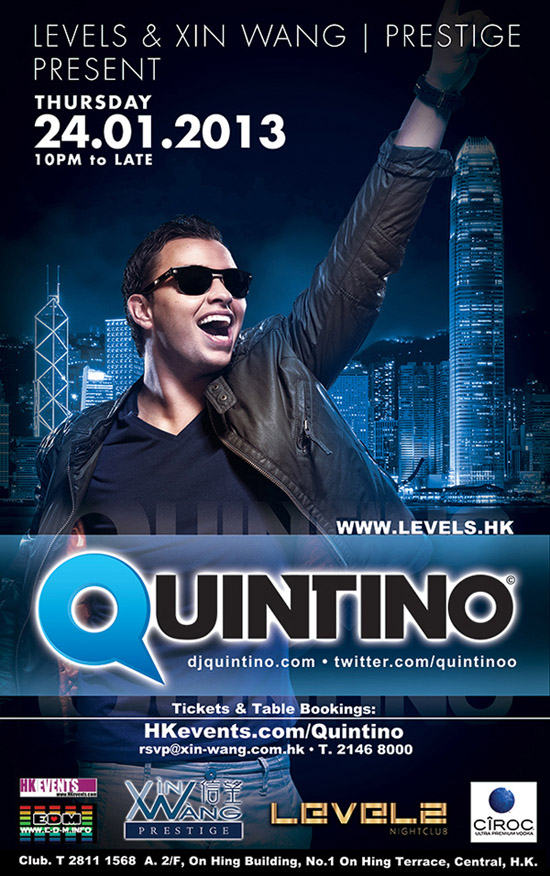 Rising Dutch superstar Quintino is one of the true DJs with a lifelong passion for dance music and is on the verge of becoming one of the leading forces in the global music scene today. His high profile collaborations with the likes of Tiësto and Afrojack have made him a household name, and his solid DJ sets across the globe have earned him a respectable position in the EDM scene.

Discovered by Laidback Luke at the age of 18, Quintino started to take his stature as a DJ and producer beyond the normal club scene by playing landmark gigs and high profile festivals around the globe. Highlights include performances at Mansion and LIV in Miami, Pacha in New York, XS in Las Vegas and multiple tours across North America, Europe and Asia.


Quintino has been making headlines around the world, with club bangers such as EPIC (which has reached the elite Platinum status), SELECTA with Afrojack, Rap Das Armas (which became a worldwide summer anthem), Heaven, You Can't Deny, We Gonna Rock among many others...

Quintino's release of “EPIC” on Tiësto’s ‘Musical Freedom’ label topped DMC’s Buzzchart, entered the top 5 of the Beatport Top 100 and hit the #1 position on the Dutch charts. Smashing clubs, ‘Epic’ was quickly added to the record cases of Tiësto and Swedish House Mafia. The following months, ‘Epic’ remained at the top of the charts, selling enough copies to gain platinum status in the Netherlands.

Between producing and releasing hits, Quintino keeps performing worldwide with an estimate of 250 gigs a year reaffirming many future successes for him.  2013 promises to be a very strong start for Quintino - he is the main support act for Swedish House Mafia on January 16 in Manila, as well as the supporting act for Snoop Dogg on January 19 in Bangkok. From February to March, Quintino will be the main supporting act for Tiësto's College Invasion Tour across North America!

Don't miss this up close and personal opportunity to experience the best of Dutch and American house music on January 24! His exclusive appearance in Hong Kong at LEVELS will definitely be one for the books!  For further information, RSVP & ticketing, please visit www.HKevents.com/Quintino .