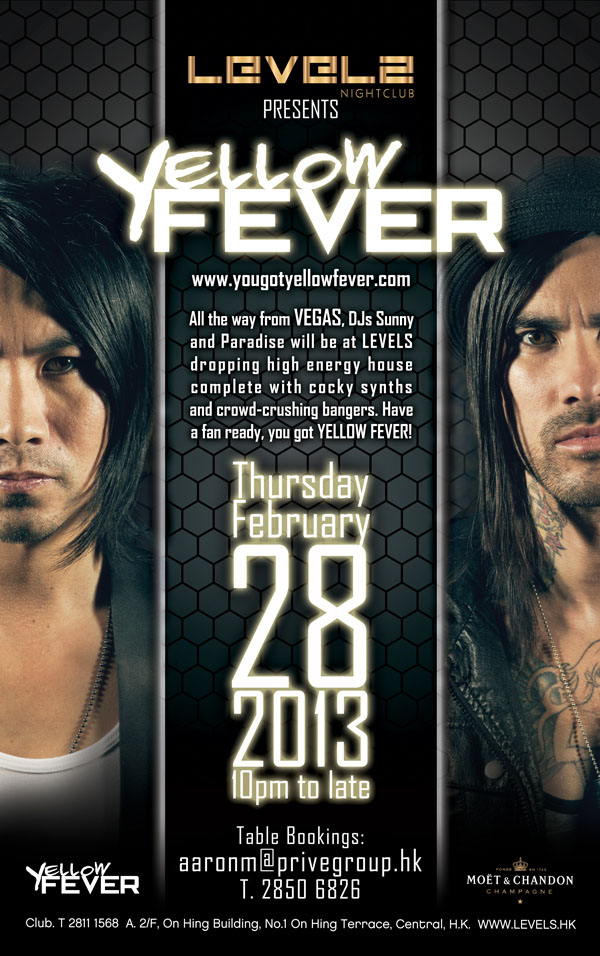 Yellow Fever is not just your ordinary DJ duo. They bring the party to where ever they perform! Not only do they produce and perform new cutting edge electro house music... They “bring the house down” with their high energy performance and on stage antics that keeps the crowd involved throughout the night.


Since they are both producers, you will not only hear your favorite songs...you will hear them with their own neck snapping electro house twist. Paradise, a Los Angeles native, was guitarist, programmer, and producer for Lips Like Morphine who opened for bands such as The Killers, Filter, and The Von Bondies. Sunny from "Sin City" Las Vegas was creating beats and house music for over 10 years along side to his production and directing of film. The diverse background of music has moulded high energy house with "cocky synths" and "crowd crushing" party tracks giving them a distinct and edgy sound.

The duo combined talents in 2009 and have been a force to be reckoned. They have worked on music and created tracks for artist such as Akon, FloRida, Pooh Bear and The Audibles (Produced singles for Lupe Fiasco, Yelawolf, and Tyga), Tatum Miranda, Castro
and producer/president of Elektra/ VP Atlantic Records Mike Caren (Bruno Mars and Cee Lo). They also have remixes for the top 10 Billboard hits from Maroon 5’s “Payphone” and Pitbull and Chris Brown’s “International Love” to Gotye’s “Someone That I Used to Love.” They have just release their self produced music video for original song “Scumbag” and are creating huge waves for 2013. Yellow Fever is currently working on several new surprise projects and looking forward to expanding their sound through out the world.