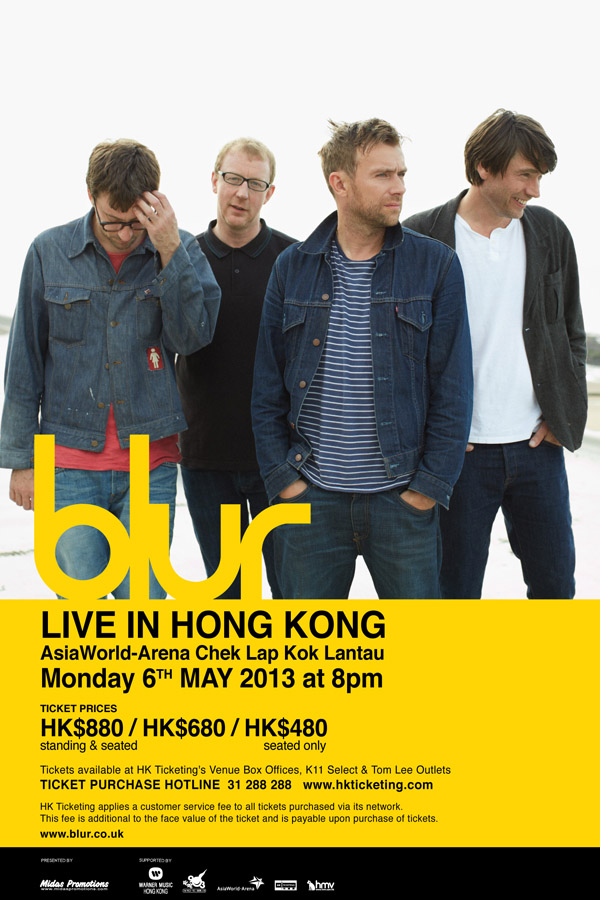 One of the most popular, most successful, most versatile British bands for the last two decades, Blur has confirmed to play a one-night only, and their first-ever, live gig in Hong Kong – Blur Live in Hong Kong 2013 on 6 May 2013 at AsiaWorld-Arena.

Formed in London in 1988 as Seymour by singer and keyboardist Damon Albarn, guitarist and singer Graham Coxon, bassist Alex James and drummer Dave Rowntree, the band was signed to indie label Food in 1989 and became known as Blur ever since. The band’s first taste of success came from debut album Leisure in 1991. The following years Blur released what are now regarded as classics: Modern Life Is Rubbish (1993), Parklife (1994) and The Great Escape (1995) – albums that helped propel the band to mass popularity in the UK and beyond.

2012 saw the band receive a BRIT Award for Outstanding Contribution to Music, and two new songs written ahead of their massive sold out show in London’s Hyde Park to mark the closing of the Olympic Games. The songs “The Puritan” and “Under The Westway” were debuted live on Twitter via a worldwide video stream from a London rooftop. To mark the 21st anniversary of their debut album’s release, 2012 also saw Blur 21: The Box, the band’s body of work compiled and gathered together into one box.

Now, over two decades since the release of Leisure, Blur is touring the world again, Hong Kong being one of the stops. Fans should not miss their chance to see the band’s first ever concert in Hong Kong! Brought to Hong Kong by Midas Promotions, Blur Live in Hong Kong 2013 will be held on 6 May 2013 AsiaWorld-Arena. Tickets are on sale from 25 February 2013 at HK Ticketing’s Venue Box Offices, K11 Select and Tom Lee Music Stores. Ticket purchase hotline: 31 288 288, www.hkticketing.com.