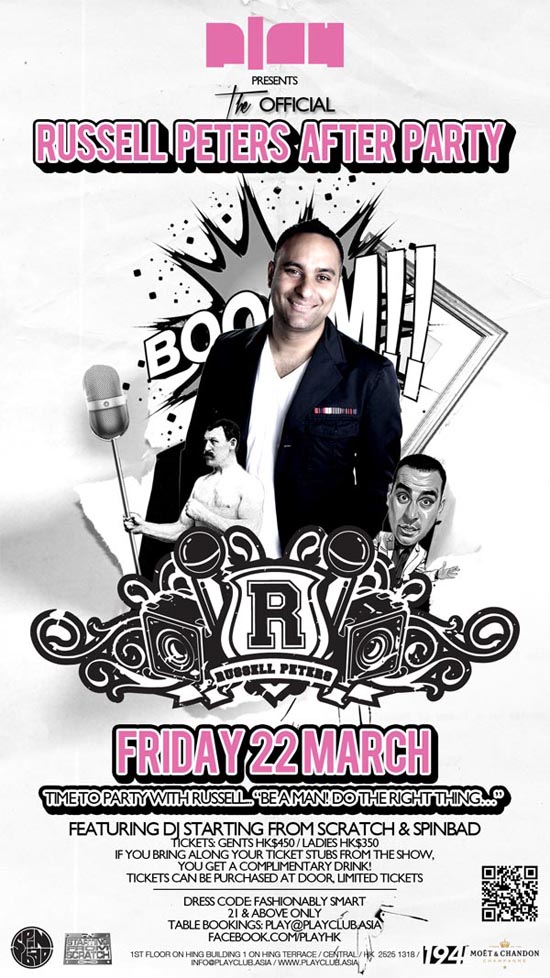 The ever so hilarious Russell Peters is coming to Hong Kong for a limited time only! Other than busying himself with two live shows, the Indo-Canadian comedian and actor will laughing his way to the exclusive after party held only at PLAY on March 22nd, Friday. Moreover, he will be coming with his famous entourage that boasts two talented DJs – Spinbad & Starting from Scratch.

The Los Angeles based talent has been ranked by Forbes as one of the top ten highest grossing comics in the U.S in 2009 and 2010; what’s more, the funny Russell Peters has performed with other well-known comedians such as Dave Chapelle, Dane Cook, Tracy Morgan, Chris Tucker, Damon Wayans and Jon Lovitz to name only a few. He has charmed with laughter into hearts of many people with his brand of observational comedy that incorporates stories about his family and material about races.

DJ Starting from Scratch, originally from Montreal, has worked alongside artists like Kanye West, John Legend and Kardinal Official and is currently touring with childhood friend Russell Peters. Another of the DJs that is presently touring with the comedian is DJ Spinbad, from New York and has worked with the electronic artist Moby.

Russell Peters is undoubtedly an international comedian having performed in various countries around the world. This is surely a not-to-miss event with the brilliant and humorous Russell Peters at the after party for one night only exclusively at PLAY. ‘Be a man, do the right thing!’