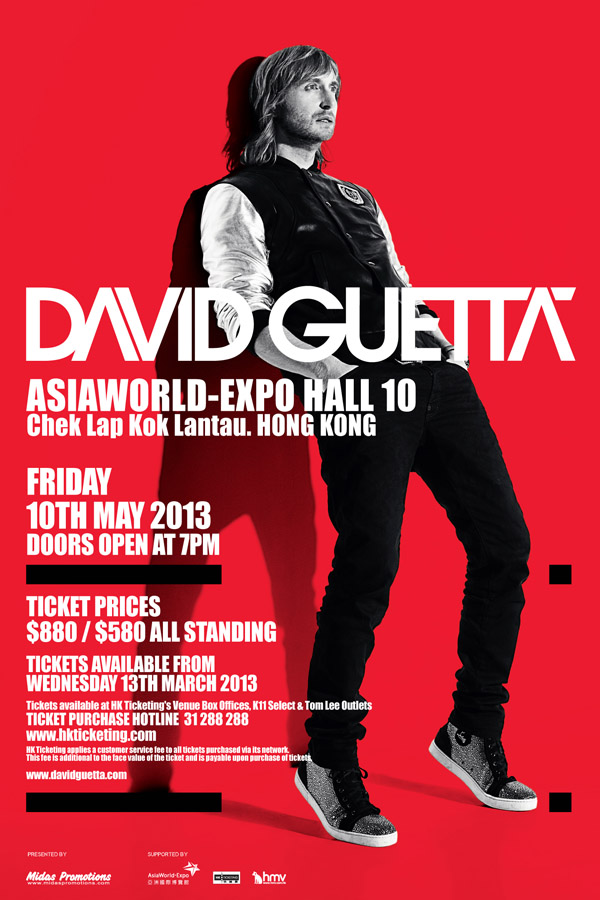 Originally a DJ at nightclubs, David Guetta released his debut album Just a Little More Love in 2002, followed by Guetta Blaster (2004) and Pop Life (2007). His 2009 album One Love and accompanying re-release One More Love spawned such hit singles as “Sexy Bitch” featuring Akon that reached No. 1 in the UK and attained 3-platinum in the US, “When Love Takes Over” featuring Kelly Rowland, “Memories” featuring Kid Cudi, “Gettin’ Over You” with Chris Willis featuring Fergie and LMFAO and “Who’s That Chick” featuring Rihanna. One Love boasts four No. 1 singles in the UK and four No. 1’s on the US Billboard club chart. The album also won the prestigious NRJ Music Award in France for Best International album in 2010.

In 2011, David Guetta released his much anticipated fifth studio album Nothing But The Beat in which he enlisted an all-star cast including Flo-Rida, Nicki Minaj, Taio Cruz, Ludacris, will.i.am, Usher, Snoop Dogg, Akon and more.

Up till now, the Grammy Award-winning DJ has sold over 5 million albums and 17 million singles. He was voted as the No. 1 DJ in the DJ Mag Top 100 DJs fan poll in 2011. Guetta picked up his second Grammy award for Best Remixed Recording for his remix of Madonna’s “Revolver” in 2011. He won the same award in 2010 for his remix of his own hit “When Love Takes Over”. Guetta also won three 2011 World Music Awards, namely Best Producer, Best Music Video and Best Commercial Dance Track.

David Guetta has become one of the world’s biggest DJ, changing the perception of his art-form, headlining all-genre music festivals, filling stadiums and yet still gets up-close with his fans in his beloved clubs. Guetta’s weekly antic at Pacha, Ibiza every summer – F*** ME I’M FAMOUS is simply legendary.

Be prepared for a night of crazy party with David Guetta! Brought to Hong Kong by Midas Promotions, David Guetta Live in Hong Kong 2013 will be held on 10 May 2013 AsiaWorld-Expo. Tickets are on sale from 13 March 2013 at HK Ticketing’s Venue Box Offices, K11 Select and Tom Lee Music Stores. Ticket purchase hotline: 31 288 288, www.hkticketing.com.

David Guetta Live in Hong Kong 2013
Date:     Friday 10 May 2013
Time:     Doors open at 7pm
Venue:     AsiaWorld-Expo Hall 10
Tickets:    HK$880 / HK$580 All standing (Restricted to Age 16 or Above)
No replacement for any loss of Standing tickets
Available from 13 March 2013 through HK Ticketing, K11 Select and Tom Lee Music Stores
Ticketing hotline:    31 288 288
On-line ticketing:    www.hkticketing.com
HK Ticketing applies a customer service fee to all tickets purchased via its network. This fee is additional to the face value of the ticket and is payable upon purchase of tickets.
David Guetta official website: http://www.davidguetta.com