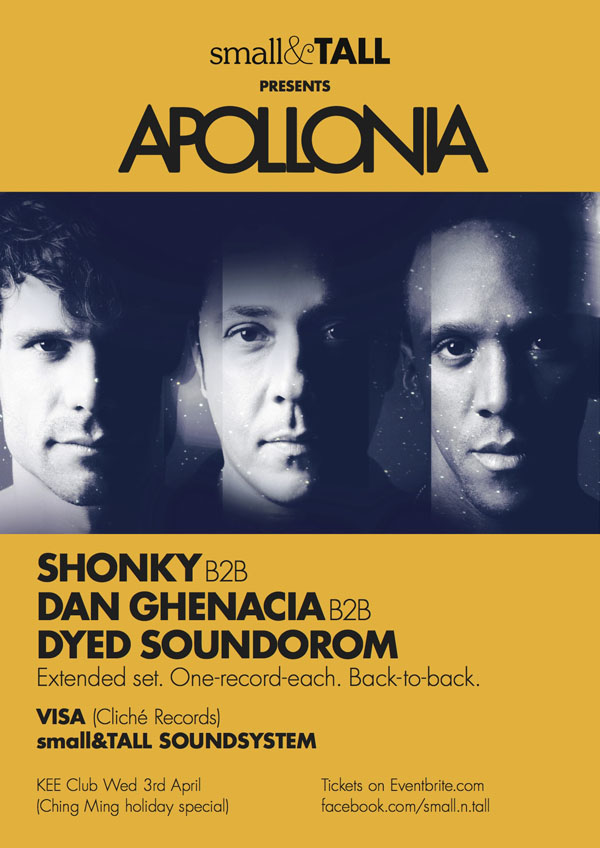 small&TALL: APOLLONIA (Dan Ghenacia, Dyed Soundorom and Shonky)
EXTENDED SET. ONE RECORD EACH. BACK TO BACK

Making the most of KEE's newly enlarged DJ booth are these French heavyweights:

Hailing from Paris, accomplished solo DJs, producers and record label heads Dyed Soundorom, Dan Ghenacia and Shonky united forces in 2012 to form a unique back-to-back-to-back performance format and record label known as APOLLONIA. Their dynamic sets have been dubbed "a masterclass in keeping the groove", as the DJs play one vinyl track each and successfully integrate 3 musical minds over sets that often last more than 5 hours. So who are they?

DAN GHENACIA
Considered the kingpin of the Paris underground, Dan Ghenacia, founder of the seminal Freak N'Chic imprint (which released Jamie Jones' debut EP) discovered electronic music while living in California in his 20's. He brought his newfound sounds back to Paris to share it with his friends through his own vinyl shop Traffic Records. Thereafter he started DJing and organizing after parties at the infamous Batofar, and quickly met future friends and label mates Dyed Soundorom and Shonky, who went on to release tracks of their own on his label.

DYED SOUNDOROM
Dyed Soundorom rocked small&TALL last spring straight off the plane from Ibiza, where he holds a Circo Loco residency at DC10. He first made his name as a promoter in Paris, where he quickly moved to DJing and then producing, releasing his first tracks on Freak N'Chic, and then shortly after Crosstown Rebels, Supplement Facts, and now Apollonia. For those who remember his unique techno-meets-deep-house set from last time, get ready for something new with Apollonia. We're looking forward to having him back. Here's the interview he did for smallTALK last time:
http://www.youtube.com/watch?v=bRpgO-maT7k

SHONKY
Shonky, a long-time electronic music lover, met Dyed and Dan Ghenacia at Batofar in Paris in the 90's where he quickly honed his DJ skills. Inspired by Dan and other luminaries like Ivan Smagghe, Shonky has played all over Paris since 1998 and is now a regular in Ibiza and Berlin. He released his first track on Freak N'Chic in 2005 and can add Mobilee, Substatic, Resopal, and now Apollonia to the list of imprints he has represented.

VISA
There’s no better name to give a talented DJ/Producer, and Founding Director of Cliché-records, than a man sharing our goals and hell-bent on transforming this shiny metropolis, connecting the dots in the dance music scene – linking HK & Taiwan & other expanding Asian cities– to the bright lights of the rest of the world and what’s emerging out there in the NU-disco scene. Access all areas & who do you get? Voila, VISA, who has brought HK the likes of The Magician, Justin Faust, Classixx, Attar!, Don Rimini, Jupiter, Drop Out Orchestra, Moullinex, Breakbot, Aeroplane and Bicep. Catch him championing his diverse electronic French sound that traverses the spectrum from house to nu-disco, and all the bits in between.
https://soundcloud.com/0visa0

small&TALL SOUNDSYSTEM
Our beloved residents will be tag teaming it all night upstairs at KEE with a diverse range of sounds, starting off slowly and picking up throughout the night.