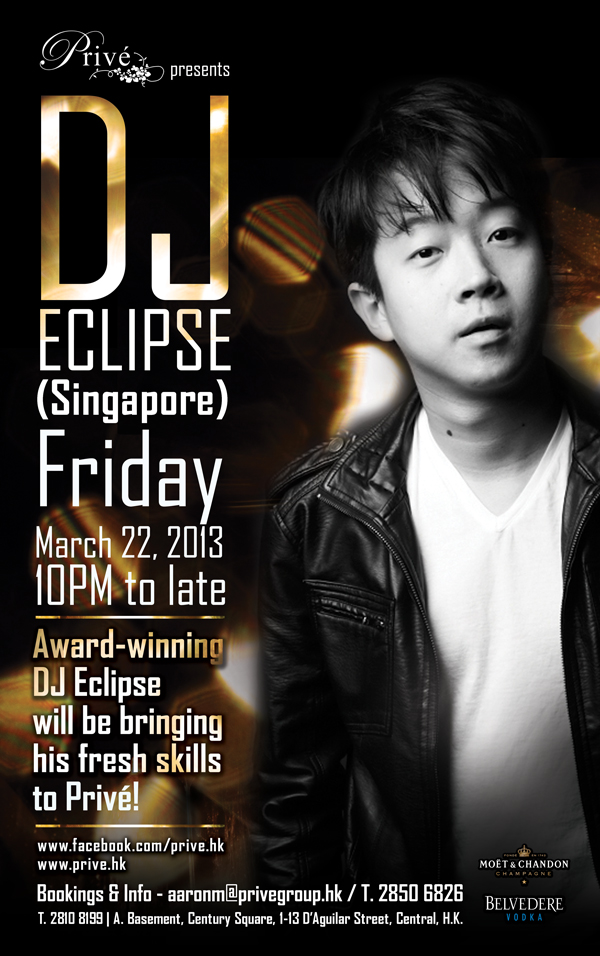 One of the freshest face on the block, DJ Eclipse from Singapore is a talent already made. 2011 saw him snatching up the Best DJ award by JUICE Magazine, followed by his release of the Universal Music’s mix album compilation, TEASE. In 2010, he was also awarded the Best New DJ by JUICE, and voted the Top 10 DJs by I-S Magazine.

Fast forward to 2013, and it has already been an incredible start for Eclipse where he appeared alongside the Swedish House Mafia for their “One Last Tour” in Asia. After earning his stripes in truly illustrious company thanks to early headline slots with Afrojack, Avicii, Alesso, David Guetta, Hardwell and other well-established DJs, Eclipse is confirmed at one of the world’s most celebrated venue, Space Ibiza, for the summer opening party 2012. He has also held his own at ZoukOut 2010, 2011 & 2012, which sees a record breaking 40,000 party revellers.

With huge showcases events across Europe and Australia, Eclipse is set for an explosive and earned ascendance towards global consciousness. His passion & scintillating intensity define him as the new blood to watch out for, setting the standard and exceeding the norm, little is left to dispute that 2013 will be this enviously talent’s year.